Update on Discussions of CFC-11 and Montreal Protocol Meetings

The issue was taken up at the meetings in the plenary, where EIA took the floor to deliver an intervention urging parties to act swiftly to respond. After discussions in the plenary, SIXTY countries (an unprecedented number) co-signed a conference room paper (CRP) to deal with CFC-11 emissions. A contact group which met several times during the course of the meeting, demonstrated how seriously Parties were approaching this issue. The contact group decided on a number of next steps including further action by the Montreal Protocol’s key scientific and economic technical bodies the SAP and TEAP, exchange of information and data by parties, and a summary paper by Ozone Secretariat.

The meeting ended on Saturday after 10pm, after finalizing other issues on the agenda including energy efficiency, data reporting, nominations of Technology and Economic Assessment Panel (TEAP) senior experts and adjustments to the Protocol. The issue of unexpected emissions of CFC-11 will be back on the agenda at the Meeting of the Parties in November, but there is a lot to be done until then.

Below is a full transcript of EIA’s plenary intervention: 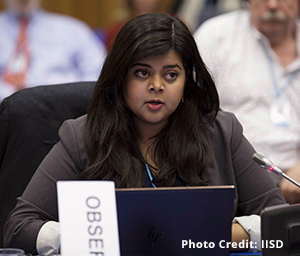 Earlier this week, the Environmental Investigation Agency released a report presenting findings from our initial investigations into the unexpected CFC-11 emissions. A copy of this report is available on the meeting portal. Through multiple means including research and on-the-ground investigation, we have obtained evidence that CFC-11 is being used in the rigid polyurethane (PU) foam insulation sector, particularly in the building and construction subsector.

Eighteen out of 21 companies surveyed in ten provinces in one country, confirmed not only their usage of CFC-11 as the primary blowing agent in the manufacture of PU foams but also expressed that this represents common practice across the industry. It is therefore imperative that the Parties to the Montreal Protocol and its institutions undertake urgent and comprehensive action commensurate with the scale of this issue.

While we acknowledge that there may be other sources of these emissions, as per our calculations based on information gathered and other supported assumptions, emissions from the PU foam sector could account for a significant part of the emissions observed and reported in the Nature paper. Additional ozone and climate impacts will be manifested over the lifetime and at the end of life of this new bank of foams.

Our report discusses a number of possible drivers of this illegal use, but primarily it comes down to the availability of cheap CFC-11 and its efficacy in the production of foams. We urge the Parties to the Montreal Protocol not to treat this as isolated incidents by a small number of companies but to take a comprehensive approach to tackling this environmental crime which includes examining the drivers of the production and use of CFC-11.

EIA is encouraged by the willingness expressed and shown by all parties yesterday and today, to actively and transparently participate in the discussions on the issue. It behooves us all to act immediately to ensure transparent and swift exchange of data and information as discussed today, that will allow a thorough examination of steps required to ensure enforcement and compliance with the obligations of the Montreal Protocol for all controlled substances.

It is clear from the discussions so far that none of us in this room need to be reminded that the significant quantities of CFC-11 in question here not only threaten our slowly healing ozone layer but also our climate.

Equally importantly, this serious situation presents an opportunity to sustain and reinforce the hard earned reputation of the Montreal Protocol as the most successful environmental treaty by taking swift and effective action.

Thank you once again for the opportunity to speak to this critical issue.