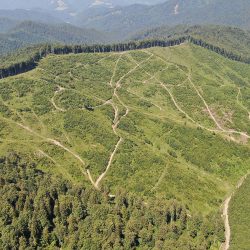 “You Pay, They Work For You”: How Timber Companies Buy Out Gabonese Officials To Turn a Blind Eye to Forest Crimes

You have to pay to get out of trouble, convince public officials to do favors for you, and maximize your reward. The timber industry in Gabon relies upon taking full advantage of an environment of rampant corruption to evade the law and extract as much timber and profit as possible. In this fourth installment of EIA’s Raw Intelligence series, we introduce you to the company Hua Jia – one of the most emblematic timber companies in Gabon. Hua Jia officials had much to say on how they and others in the industry operate – and cheat their way to profit-laden pockets.

In order to present the truth and bring more evidence to the public eye, EIA recently launched a video series called Raw Intelligence. Through minimally-edited undercover videos, capturing timber sector management speaking in their own words, EIA demonstrates how the crimes documented in our report Toxic Trade – money laundering, tax evasion and other widespread rule-breaking – are pervasive, structural and indisputable.

Hua Jia, a subsidiary of the state-owned China International Forestry Group Corporation, is one of the highest profile timber companies operating in Gabon, with over 350,000 hectares of land comprising its concession. Three-quarters of the company is owned by the Yihua Group, a private Chinese conglomerate that invests in real estate, health care, and tourism, and has been recognized as one of the “Top 500 Most Outstanding Private Enterprises in China” for more than 7 consecutive years.

In 2016, Hua Jia pledged that they would comply with requirements found in “The Guide on Sustainable Management and Utilization of Overseas Forests by Chinese Enterprises,” issued by China’s State Forestry Administration, and intended to prevent illegal logging, as outlined on page 60 of EIA’s Toxic Trade report.

EIA investigators discovered that the business is far from aboveboard. Our undercover video shows a Hua Jia official describing how standard rules, and even international commitments, do not apply to their operations. When EIA investigators asked if China’s sustainable forest guidelines influenced Hua Jia business, an official answered “Those domestic regulations don’t apply to us. This is Africa. We only follow whatever is locally required.”

An investigation by environmental NGO Brainforest revealed that the company had committed illegal logging by harvesting on agricultural land without authorization, including the absence of legitimate contracts with small holders. Furthermore, Hua Jia was not keeping track of timber harvested, in direct violation of Gabonese laws surrounding timber traceability. EIA investigators talked with Hua Jia officials who said subleasing land from more established companies that already had acquired concessions is a common practice among newer investors, even though subleasing is illegal in Gabon.

In Raw Intelligence footage, the Hua Jia official further asserts that conducting a timber enterprise in Gabon relies upon bribing corrupt officials. He notes that a big expense is money for payoffs to Gabonese authorities. Hua Jia pays a staggering amount equivalent of US$29,000 in bribes every month in order to operate as it does in the country.

He explains that these bribes are fees “to pay off officials from different organizations” such as the “water and forestry department, environmental offices, city governments, and public health departments.” He describes a pay-to-play scheme whereby timber officials pay authorities in order to do their dirty work: “you pay, they work for you. You pay 10,000 RMB, they help you with 10,000 RMB worth of problems.” The buying off of key officials clearly undermines the government’s ability to crack down on timber illegalities. When EIA investigators asked if the Hua Jia official could avoid these payments, he said “there is no way you can get away from this,” adding that other companies are in the same situation.

Notwithstanding what they must pay in bribes, endemic corruption allows Hua Jia to operate the way they want – disregarding or manipulating the law in order to make quick and hefty profit. The officials mention that they have a profit rate of “more than 30 percent,” and that making at least 30 percent profit is average for a timber company. In comparison, even some of the most successful companies in the world, like Amazon, can only claim profit margins below five percent.

For years, bribery and corruption have appeared nearly unavoidable when working in timber in Gabon; timber officials had no problem admitting this to EIA investigators. But now with the President of Gabon shuffling government officials’ seats – with the specific intent to create a government that is “exemplary, honest and ethical” – it is a pivotal moment to investigate and crack down on all the guilty parties – including companies like Hua Jia that reap the benefits of a broken system, and the complicit public officials who enable their crimes.

If there is any hope of creating a legal, sustainable timber industry in Gabon – one that does right by its forests and the Gabonese people – the time for accountability is now.