Update June 24, 2020: If you’re in the market for an HFC-free fridge make sure to check out our Buyers Guide, a continuously updated list of available HFC-free models.

When a refrigerator breaks in a typical Washington D.C. office, the office manager’s biggest concern might be how long after sending out an all-staff email to wait until tossing the unclaimed yogurt containers and boxes of takeout. But here at EIA, when our fridge finally quit – albeit after a few attempts to give notice – I had a bigger concern. It wasn’t only the cost of a new refrigerator; it was the fact that we as an organization are explicitly devoted to mitigating emissions of super greenhouse gases – hydrofluorocarbons (HFCs) – commonly found in coolants used for refrigeration and air conditioning. Our commitment to a global phase-down of HFCs means it would be nothing short of hypocrisy not to obtain a climate-friendly fridge.

Sounds easy enough. This is America after all, the home of infinite consumer choice and possibility. A country where you can get just about anything you want with the click of a computer mouse. Obtaining a verifiably climate-friendly fridge – for your home or office – would be no problem in the U.K., Sweden, or even India. But here in the U.S.? Well, as I would come to find out, it’s not so easy.

First off, I had to know what exactly “climate-friendly refrigeration” was. So I consulted our Climate Policy Analyst, Christina Starr. Christina explained that we would want a fridge that is HFC-free. She got me started by mentioning that both GE and Bosch purportedly offered models using climate-friendly hydrocarbon refrigerants – either R-600a (isobutene) or R-290 (propane) – which both have a very low global warming potential (GWP) of below 5. HFCs have GWPs greater than 1000! Additionally, such refrigerators are typically much more energy efficient than HFC ones, making them an even better choice from a climate perspective.

I tried GE first and discovered that the company only offers one HFC-free fridge in its Monogram Collection, which would be a great option, but for its ‘slightly’ above non-profit-budget price tag of $7,000.

Next I looked at Bosch, which manufactures five climate-friendly models, and is one of only two brands of “residential refrigerators” that has been recognized by an Energy Star® Emerging Technology Award as well as the EPA. I started examining each of the five models. They were all tall, skinny, and, surprisingly, each equipped with a wine rack, a feature from which one could not opt out, and an odd luxury for a communal workspace fridge. And, due to the limited selection, regardless of which one we chose we would have to adjust the kitchen space in order to make it fit where our short, stout old fridge had been.

Also, I was struck by the fact that while these models were all labeled “environmentally friendly,” it was hard for me to find information on exactly what type of refrigerant was used in any of them. I looked at all available links to the products and several PDFs, and nowhere in the technical specifications did it indicate the refrigerant explicitly.

I contacted the retailer to verify that the Bosch models indeed used R-600a. I was put on hold; transferred; put on hold again; told that they would call Bosch; then told that no one either at the retailer or Bosch itself could give me an answer. Later, I called Bosch directly. I spoke to a very nice person who kept putting me on hold, calling other technical experts, pulling up manuals and technical spec sheets. Finally, he said he would bring it up with his supervisor and get back to me. I must have been the only customer ever who has bothered to inquire about the refrigerant!

I was starting to get frustrated, not just because the office would be without a fridge for the foreseeable future, but also because it was proving so difficult to do the right thing. Alternative climate-friendly refrigerators are not even something new. Since the early 90s, GreenFreeze – a cooling technology developed by scientists affiliated with Greenpeace – has been freely available to the world, and is commonly used in refrigerators throughout Europe and even many places in the developing world. 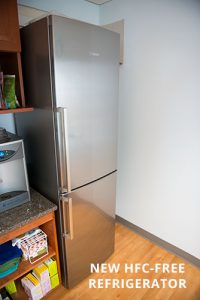 There is of course a reason why a climate-friendly refrigerator is so hard to find in the U.S., and why the ones we did find were oddly shaped and designed! Hydrocarbon refrigerants have been very limited by obsolete industry standards in the United States. In fairness to Bosch and other fridge manufacturers, they have faced significant barriers to selling these appliances here in the U.S., including a lagging industry safety standard that was only recently updated to be in sync with the rest of the world. Bosch and other companies would love to be able to mass market environmentally-beneficial refrigerators, as they do in Europe and elsewhere, here in the U.S. The final hurdle now remaining is the need for revised federal regulations that incorporate the aforementioned updated industry standard. There is hope as these regulatory updates, which companies like Bosch have been vocal proponents of, are in the process of being finalized by EPA.

After waiting a few days, I called Bosch again and finally the representative I spoke with was able to find a page hidden in a 47-page “Technical Repair Manual” that verified one of the models indeed used R-600a. He scanned it and sent it to me, and this one page – which felt like the Holy Grail of refrigeration – is the only proof we have of doing the right thing.

Today, at long last, our new office refrigerator has arrived! Sleek and stylish as she is, the time, cost ($2,300), and effort is well worth it if EIA can lead by example and help build the wave towards a climate-conscious future. Hopefully, sometime very soon every customer will actually ask what refrigerant is used in their fridge, which would enable companies wanting to do the right thing to display it prominently and convey it down to their global staff. It will also certainly help drive down costs, making these climate-friendly models more widely available to consumers. In this very near future, every U.S. office space can be proud of where their employees pack their lunch. For the moment, we at EIA have a climate-friendly place to cool the champagne for when that time comes.