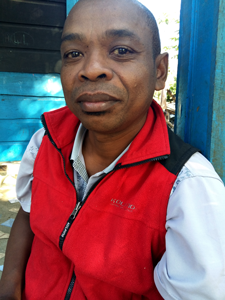 On May 15, Christopher Magnenjiky was arrested and charged with rebellion, civil disobedience, and “disrespecting a public officer.” Tomorrow, a judge is expected to make a decision regarding Christopher’s fate. Many fear that Christopher will join the long list of activists unjustly jailed in Madagascar – all because they challenge the activities of illegal timber barons and a corrupt government that protects them.

Christopher is now detained at the Maroantsetra central prison. His case closely resembles those of previous activists jailed in Madagascar, where obtaining access to supporting documentation for the arrest is close to impossible; unfounded charges including “rebellion” and “disrespect” are the meager justification for detainment; and the trial is kept as confidential as possible.

According to Amnesty International, the current detention of Christopher is itself unlawful. Tamara Léger, Madagascar Programme Advisor, explains: “While Christopher is still presumed innocent according to the law, he has already spent more than three weeks behind bars in the Maroantsetra prison and his request for temporary release was refused. This violates Madagascar’s own Constitution which provides that pre-trial detention must only be used in exceptional circumstances.”

Christopher is 46 years old and the father of four. He works as an English teacher at a local high school and is in charge of communications for the Lampogno Coalition, a well-known Malagasy environmental network. Clovis Razafimalala, coordinator of the Coalition and 2018 recipient of the German Africa Award, was jailed for 10 months last year in Madagascar. He says Christopher’s situation is mirroring his own: “Christopher is my colleague; like me, he is trying to help his people and protect our unique environment. And like me, he raised his voice against the rosewood traffic in Madagascar and so was arrested. I don’t want him to suffer what I suffered.”

Rosewood trafficking has become the world’s biggest wildlife crime, eclipsing elephant ivory, rhino horns, tiger skins, and pangolins. From Madagascar alone, millions of dollars worth of rosewood has been smuggled out of the country over the past decade. The 183 Member States of the Convention on International Trade in Endangered Species (CITES) have repeatedly demanded that Madagascar focus its enforcement actions on the real criminals, the ones who profit from the illegal exploitation of irreplaceable forests and destroying the livelihoods of local, forest-dependent communities. To date, not a single timber baron has been jailed in Madagascar or held accountable for criminal activities. Instead, the very people who are fighting the crime are being sent to prison. 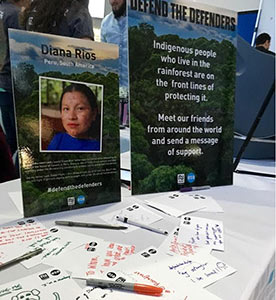 Awareness is growing around the globe regarding the dire fate that environmental defenders and their families face on the front lines every day — being silenced, threatened or murdered. The nonprofit REVERB, which harnesses the power of live music to create positive change for people and the planet, is shining a light on this travesty, highlighting the stories of three Earth defenders on the Maroon 5, Barenaked Ladies and Dead & Company tours this summer. Fans are writing messages of solidarity directly to Diana Rios from Peru, William Aljure from Colombia, and Clovis Razafimalala from Madagascar.

International pressure has helped to liberate and protect environmental and human rights activists in the past. Razafimalala remains hopeful: “I will not be defeated and I will continue to fight against all forms of injustice and abusive exploitation of our natural resources. I will give my life for the forest and Malagasy biodiversity because our future will depend on it.”

Whatever the court in Madagascar decides tomorrow, the world is watching and people across the globe stand ready to defend Christopher Magnenjiky, along with the countless other defenders who are fighting to protect their way of life and world renowned biodiversity from corruption and greed.

Mr. Christian Ntsay took office this week as Madagascar’s new Prime Minister. Ntsay should utilize his tenure to end the government’s corrupt patronage of criminals and vindicate those who are actually working to protect the country’s resources.