On April 14th, 2019, South Africa’s Directorate for Priority Crime Investigation – often referred to as the “Hawks” – arrested two suspects in possession of 167 rhino horns after stopping and searching a vehicle in North West province. According to the Hawks, the massive haul of rhino horns was destined for the black markets of Southeast Asia. The April bust represents the single largest seizure of rhino horn made in South Africa since the rhino poaching crisis first hit the country in 2008; it also demonstrates how South Africa’s domestic rhino horn regulatory framework can be exploited to enable international rhino horn trafficking.

While initial details about the record-breaking rhino horn seizure were limited, nearly a month later a clearer picture has begun to emerge. We now know the horns originally belonged to John Hume, a rhino breeder and ardent rhino horn trade advocate who possesses the largest privately-owned herd of rhino in South Africa. The two men arrested, Clive John Melville and Petrus Stephanus Steyn, were reportedly transporting the rhino horns on behalf of the buyer but lacked the permits required to move the horns from Hume’s ranch across the country. We also know Hume has not been paid for the horns and is claiming the horns are still his property. Hume and the buyer had agreed that payment would occur after the buyer re-sold some of the horns, presumably to clients in Southeast Asia based on the allegations made by the Hawks. If the authorities can prove that the horns were destined for illegal trade, Hume and the still-unnamed buyer could face charges as well. Melville and Steyn have since been released on bail and are due back in court on July 12th.

Evidence continues to mount appearing to indicate that criminal syndicates are exploiting South Africa’s rhino horn regulatory loopholes. In addition to this latest record-breaking case in South Africa, images of recent seizures in Asia appear to show rhino horn that had been shipped from South Africa with physical characteristics of horn that has re-grown after a dehorning operation. If the authorities in Asia share samples of rhino horn with the authorities in South Africa, it may be possible to link the seized horns to individual rhinos, and potentially their owners, using the University of Pretoria’s Rhino DNA Index System. 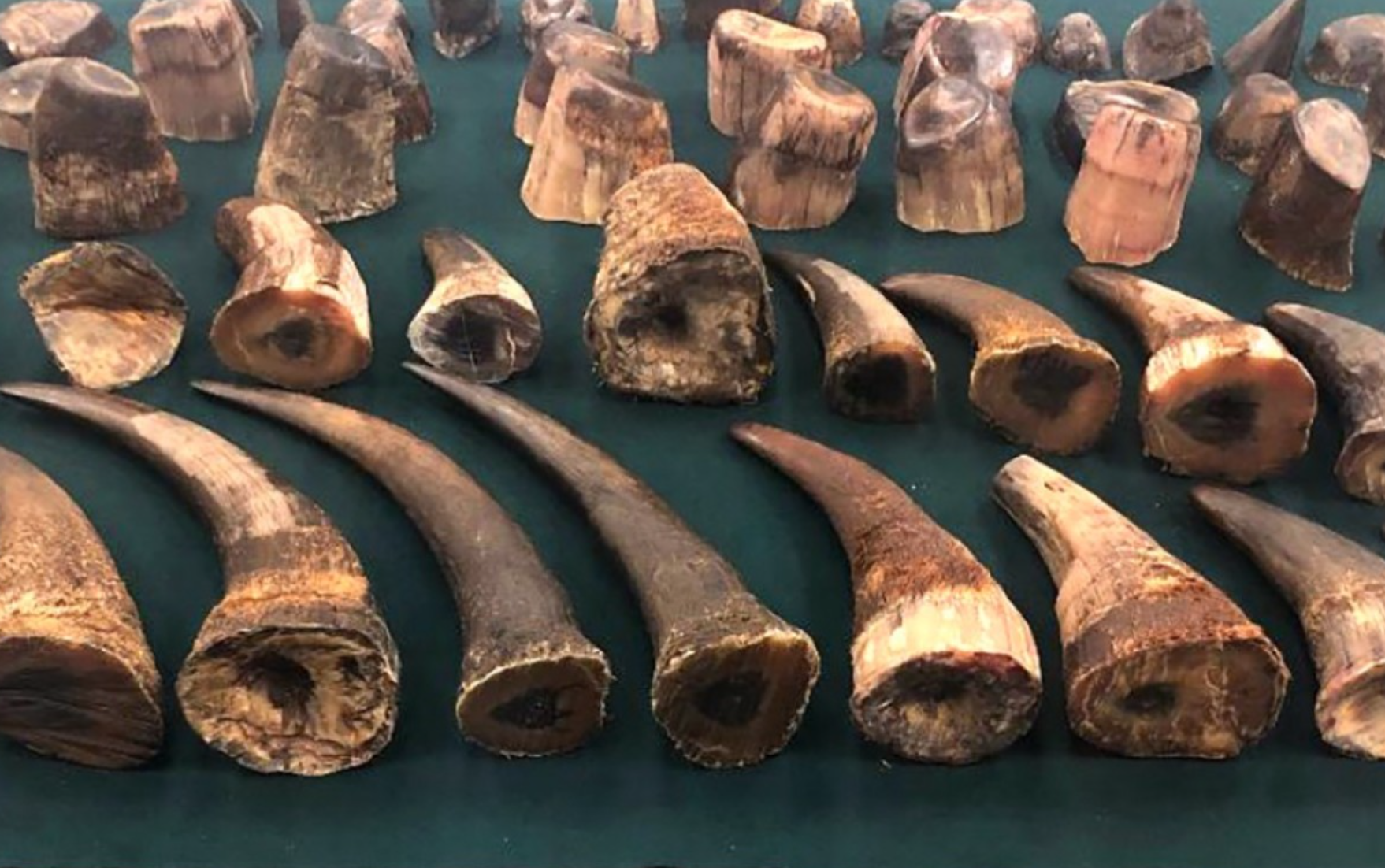 As is the case with elephant ivory, parallel legal markets serve only to stimulate demand, complicate enforcement, and provide laundering opportunities. Conversely, closing domestic markets simplifies enforcement and, when effectively implemented, leads to a reduction in poaching and illegal trade. This is exactly what happened for rhinos in the early 1990s: consumer countries closed their domestic markets in compliance with the CITES directive to eliminate all internal trade in rhino horn, which caused poaching rates to drop off sharply and allowed rhino populations to begin to recover. Unfortunately, CITES Parties repealed the provision on domestic rhino horn markets in 1994, and a decade later rhino poaching rates started to increase once again with the emergence of Vietnam as a new market for rhino horn and a revived demand for rhino horn in China.

At the upcoming 18th Conference of the Parties to CITES (CoP18) the world’s governments will have the opportunity to restore this critical protection for rhinos. Kenya has submitted a proposal to revise the CITES resolution that regulates the conservation of and trade in rhinos to call for the closure of all domestic rhino horn markets as a matter of urgency. EIA is urging all Parties to finally eliminate all trade in rhino horn, both domestic and international, by supporting Kenya’s proposal.