Part one in a series on policy trends on eliminating HFCs, emerging from California.

It’s not an exaggeration to say that California will reshape the U.S. cooling sector in the next decade. New regulations and incentives to reduce potent climate warming refrigerants – hydrofluorocarbons (HFCs) – will help drive innovation and faster adoption of climate-friendly technologies in refrigeration, air conditioning, and even the water heating systems in our homes, office buildings, and supermarkets.

HFC emissions have been rising sharply in California and globally. Yet, the state has a rapidly approaching target under SB 1383 to reduce them to about half of current levels by 2030. California is racing the clock to meet this 2030 target by finalizing initial rules this year, while also considering additional measures to set this sector on a long-term path consistent with achieving carbon neutrality in 2045.

EIA attended a workshop with California’s Air Resources Board (ARB) last week on the evolving regulatory proposal the agency plans to finalize this summer. Most aspects of ARB’s proposal remain unchanged: GWP limits will be

The big news of the meeting was a new proposal to require conversion of the installed base of supermarket refrigeration systems. All California retailers with a refrigeration system containing over 50lbs of refrigerant will have to comply with one of two new options by 2030: a) reduce company-wide average refrigerant GWP to 1400, or b) reduce their baseline refrigerant GHG potential by 55%. Larger companies with at least 20 stores will also have an interim target to meet in 2026.

EIA called for all US supermarkets to voluntarily take this step last year, estimating that reducing the average GWP of supermarket refrigerants by 50% across the country would reduce annual emissions by more than 22 million metric tons of CO2 equivalent. That’s the same as planting 184,00 acres, or 140,00 football fields, of new forests each year. 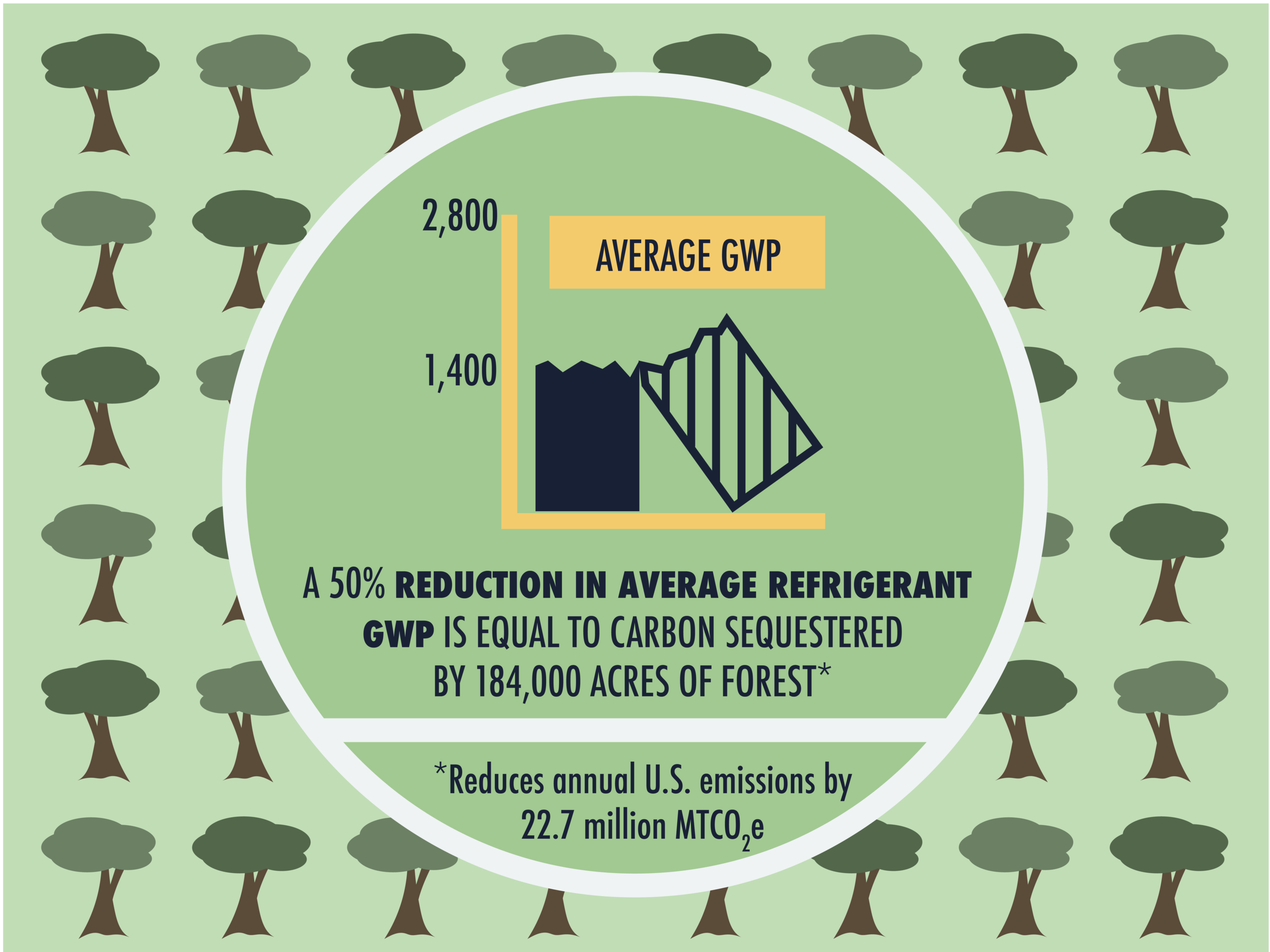 Retailers can meet this through a combination of two approaches. The preferred option is to replace aging, less energy efficient systems with ultra-low GWP, HFC-free refrigerants. They can also perform gas retrofits from HFC-404A (4,000 GWP) to transitional refrigerants that still pack a powerful climate punch around 1,400 GWP.

Supermarket CFOs beware that 1400 GWP refrigerants will need to be replaced again in the near term. Avoid paying for a ‘double whammy’ transition by developing a strategy to leapfrog transitional refrigerants and rely mainly on conversions to ultra-low GWP solutions.

The average supermarket chain could meet this by replacing around 5-7% of existing systems each year with ultra-low GWP refrigerants. Since supermarket refrigeration systems have about 20-year lifespans, this rate of replacement may not even need to greatly exceed normal replacement rates. To meet the targets with gas retrofits only, would require retrofitting nearly 100% of existing stores. ARB’s proposed schedule for meeting this conversion is likely to be accelerated over time, so a strategy centered primarily on adopting ‘future proof’ alternatives makes even better business sense for compliance with this new proposal.

ARB also announced the launch of the F-Gas Reduction Incentive Program (FRIP) this summer, which will also focus on the supermarket refrigeration sector. ARB’s initial proposal for the program structure envisions half of funding allocated to projects for ‘innovative’ or ultra-low GWP solutions and the other half to ‘conventional’ retrofits to transitional 1400 GWP refrigerants. Using cap and trade funds to subsidize 1400 GWP chemicals runs contrary to California’s climate leadership role. ARB will be taking feedback on design of the program until March 15th before releasing draft program guidelines in April and opening it to applications in the summer. Stakeholders should call for the program to prioritize projects that help overcome market hurdles for adopting the lowest GWP solutions that will maximize emission reductions.

It’s pivotal that new HFC regulations go into effect quickly and be comprehensive enough to achieve the state’s climate goals. The current HFC regulation to be finalized this July and the launch of the FRIP incentive program are shaping to be a strong start, but are also just the beginning. ARB staff noted that the currently proposed requirements are unlikely to be enough to meet the 2030 target, and that other measures to address refrigerant banks such as a servicing ban on virgin high-GWP refrigerants are still on the table.

If federal action on HFCs continues to be elusive in coming years, California’s new rules will pave the road forward for other states, a number of which are already taking action on HFCs. If the federal government picks up the slack by implementing an HFC phase-down, California’s goals call for faster and deeper HFC emission reductions and could lay the groundwork for demonstrating that the HFC phase-down can be accelerated.

The Sacramento Municipal Utility District (SMUD) also organized a workshop on accelerating adoption of heat pump water heaters to replace systems that utilize natural gas; check this space again in two weeks for more discussion on aligning HFC reductions with decarbonization, in the next post in this series.