Thank you again to HEDA for inviting me to speak today. In the spirit of keeping today’s discussion an exchange of ideas between Nigerian stakeholders and in full acknowledgement that I am a guest and observer at this event and to respect the space, I will keep my remarks brief.

In 2017, the Environmental Investigation Agency (EIA) released the results of over a 2-year investigation in Nigeria on the illegal rosewood trade; this report was called Rosewood Rackett. I must note that I was not personally involved in this investigation as I was not working at EIA at the time, but I am here to share what took place on behalf of EIA. This report exposed one of the largest forest crimes uncovered in recent history. It demonstrated that the Nigerian timber sector was in crisis, characterized by widespread illegality and massive fraud linked to large-scale corruption schemes. It displayed how the hunt for precious rosewood depleted the country’s forests; accelerated desertification in rural areas; and contributed to a staggering deforestation rate of four percent annually in Nigeria, the fourth highest in the world at the time.

Although the “kosso” tree” was included on Appendix II of the Convention on International Trade in Endangered Species of Wild Fauna and Flora (CITES) in January 2017 in order to control the trade and ensure legal and sustainable harvest, the rosewood trade was still booming. In practice, the contrary to the intended result of the CITES listing occurred: in a desperate rush to extract as many trees as possible from fragile dry forests, Nigeria was exporting approximately 40 containers a day filled with kosso timber to China and Vietnam. EIA estimated that more than four million trees, worth roughly half a billion dollars a year, were cut down in Nigeria from January 2017 to March 2018 . . . in what is thought to be the largest violation of the Convention in history. Precious trees were laundered into the international market through regional smuggling routes, using mis-declaration and falsification of official documents.

Then CITES Secretariat conducted their own investigation. In the middle of that process, EIA released a briefing “The Racket Continues” which showed that the illegal rosewood trade was still ongoing in Nigeria despite the warnings and actions taken under the international convention. Based on the result found during the Secretariat investigation the CITES Standing Committee (essentially the executive body of the Convention), at their meeting in Sochi in 2018, announced the suspension of the trade in Nigerian rosewood effective as of November 1, 2018. The trade suspension took a few months to impact international trade significantly, but it eventually did. Historically, Nigeria has been the biggest export trader of rosewood. 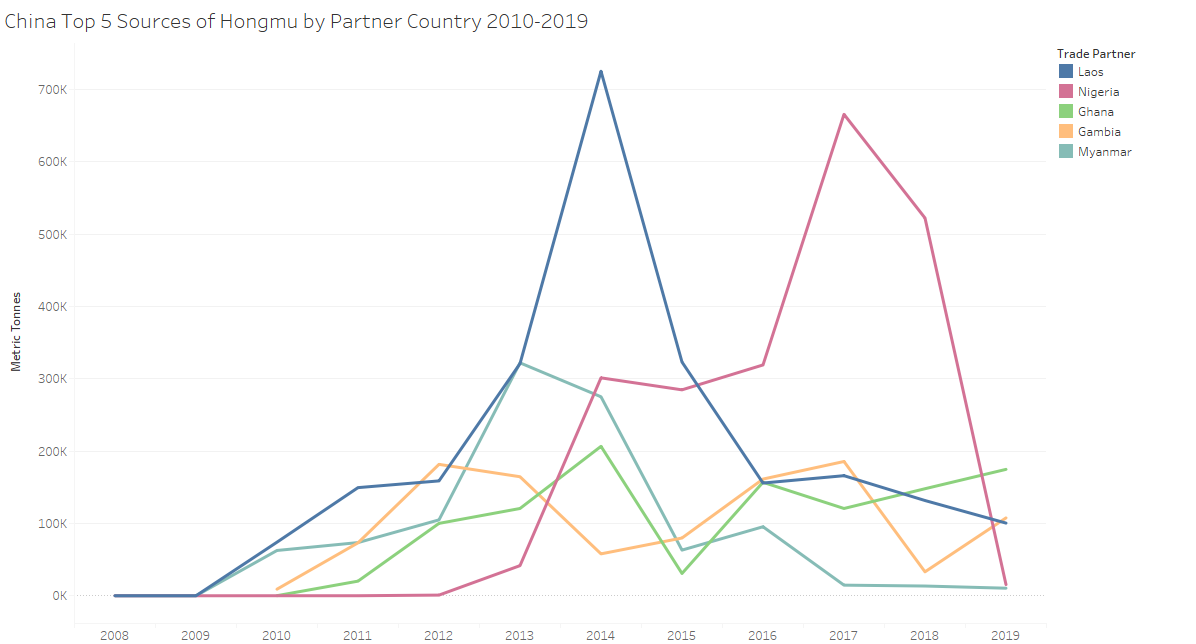 Yet recent data according to the Global Trade Atlas indicates that the volume of Nigerian rosewood imported by China in August 2019 is less than one percent than what it was a year before. This unprecedented result was accomplished over two and a half years after the listing of the species on Appendix II took effect. A variety of stakeholders were involved in contributing to this campaign’s success, in particular the Nigerian government, Chinese government, the CITES Secretariat and civil society.

Today, it is widespread seen as a success that kosso trade between Nigeria and China is virtually at zero when just 3 years ago, 40 containers were leaving EVERY day — this positive change is something we can all celebrate.
That being said, despite the significant downturn in illegal rosewood exports from Nigeria, deforestation appears to continuously increase in Nigeria; so we know the problem stems beyond rosewood. We know that other causes including illegal logging of other critical tree species continues and Nigeria still loses a large amount of its precious forests each year.

So, what can the rosewood rackett of the last decade teach us about how Nigeria can move forward in ending illegal timber trade?

First, this campaign taught us the important role of international collaboration and cooperation on enforcement of timber laws which was necessary in virtually stopping the illegal rosewood trade. As an organization, EIA looks for problems and solutions on both sides of the market. Although Nigeria at the time was the top source and exporter of kosso rosewood, there were of course importers who were accepting this timber into their countries and were also involved in the illegal rosewood trade, China as the top example as well as Vietnam. It was important to focus on trading partners of Nigeria who accepted the equivalent of millions of stolen trees. As long as there are markets willing to turn a blind eye in this way, forest crimes will continue. Therefore, stopping the import of illegal rosewood on their end was critical in order to end the illegal trade.

It also taught us the importance of cross-cutting investigation. Although on paper there were various policies in place to ensure the protection of kosso, undercover investigation was the one to show that these were not working. Investigations such as this one often uncover difficult truths and trigger tough conversations but it is necessary for investigations to occur in order to collect the necessary data and ground experience to evaluate if policies are working, and to provide in-depth insight on what is going wrong in order to make things right.
Related to this aspect is the importance of civil society, media, communities and activists to be given the space to voice their concerns regarding what is happening in their environments and to be supported and protected in their efforts to tell the truth and to be invited and encouraged to engage decision makers in policy change that will actually work in their communities.

EIA remains committed to ensuring the protection of Nigeria’s forests from further forest crimes. But moving forward, the future of Nigerian forests must be led by Nigerian hands. Many of the stakeholders in this room have already positively changed the sector and have the power to decide what the future will look like, if the next generation to come will have precious forests left. In thinking of the present moment and beyond, we also know the rosewood issues do not end with the case in Nigeria. EIA has recently conducted investigations on the illegal rosewood trade in Ghana and Zambia respectively, and EIA’s findings show corruption and collusion at some of the highest levels of government facilitating the illegal trade despite national bans placed on rosewood trade. It is clear that there is currently a rosewood crisis in Africa, and as Nigeria has gone through this before with lessons learned, Nigeria has the opportunity to lead in a regional solution.

There are also broader issues of forest governance beyond rosewood at play here. Other valuable tree species are currently threatened by illegal activity. As long as there are gaps in forest governance, traffickers will keep jumping to the next “in-demand” species. Is this the right time to improve forest governance on a large scale? In facing unique challenges as a federal state, can both different state governments and the federal government effectively overcome challenges to work together to align the forest sector? Is it possible for Nigeria to serve as a shining positive example and help its regional partners and countries solve their own rosewood crises? These are questions we should strongly consider and I am sure there will be many more important questions that emerge from today’s discussion.

In the meantime, EIA would like to extend our support of efforts made in the country to end the illegal trade of timber species. As I have discussed regarding the devastation of the forests from the booming illegal rosewood trade, it is important to note that at least according to the communities and leaders I have talked to, the forests have not yet recovered. At the same time other illegal logging activities and illegal deforestation activities continue. We are deeply concerned about this, and we are interested in learning more about the solutions Nigerian government, civil society, activists, scientists, and communities can bring forth to enforce strong action against timber illegality. Based off of the lessons learned from the Rosewood Rackett campaign, we understand that traceability and monitoring of timber, transparency and enforcement measures within the overall forest sector including exports, strong rule of law and political will when it comes to enforcement, are all critical steps in ending forest crime.

Now more then ever before, we need cutting edge innovation to protect Nigerian forests. Therefore we encourage initiatives of this nature as part of the solution, and look forward to engaging with stakeholders on the ground and explore any potential support we can provide to contribute to success of these initiatives. I have had the pleasure of traveling across Nigeria in recent weeks talking to government officials, environmental NGOs, journalists, forest guards, traditional leaders, and communities and I have seen first-hand the strong passion and drive Nigerians have to protect their environment from further harm. Together, each of us can all play a pivotal part in avoiding the extinction of precious tree species by ending forest illegality and crime and ensuring that Nigeria’s critical forests are nurtured to health and conserved for generations to come.