Find a Climate-Friendly Supermarket Near You: A Global Tool

This Earth Day, as we grapple with a global pandemic, marks a watershed moment that underscores the need for action commensurate with what science tells us is required to mitigate the global climate crisis. While climate advocates may not be able to take to the streets to demand systemic policy change this year, thoughtful consumerism is another way we can make our voices heard and drive powerful change.

Here is a tool that can help:

Last year on Earth Day, EIA launched climatefriendlysupermarkets.org, an online resource that recognizes actions toward HFC-free refrigeration in the U.S. supermarket sector. For the past year, the website highlighted achievements, encouraged further uptake of climate-friendly technology, and informed American consumers including through a searchable map of stores avoiding use of HFCs.

This year, we are launching the expansion of this map to enable submission of information on stores using climate-friendly refrigerants around the world. This interactive tool would help you find a store near you that reduces climate-warming refrigerant gases, hydrofluorocarbons (HFCs). This map is searchable by ZIP code, city, and state; and by clicking on individual stores, consumers can also learn about the specific type of climate-friendly cooling technologies used.

Why is this important?

Supermarkets, with their enormous cooling needs, are among the largest corporate users of HFCs. HFCs are the common refrigerants that cool our food, but also wreak havoc on our climate; they are thousands of times worse for the environment than the same amount of CO2. Unfortunately, the average U.S. supermarket leaks roughly 875 lbs. of HFCs a year. This means leaks from one store would be equivalent to emissions of 336 additional cars on the road. When combined, the HFC emissions of U.S. grocery retailers equal that of 49 billion pounds of coal burned a year.

It’s well known that all supermarket refrigerant systems leak at one point or another during their lifetime, even those that are climate-friendly. The difference is a natural refrigerant system has a global warming potential (GWP) of less than 10 – more commonly 1 or 3 – whereas HFCs have GWPs in the thousands. Hence, the impact and severity of a leak is vastly mitigated when dealing with natural refrigerants instead of HFCs.

In Europe and Japan, natural refrigerants have become the norm rather than the exception. In Europe alone, over 20,000 supermarkets use CO2 as a refrigerant and comprise over 90% of overall CO2 uptake. Companies are also adopting hydrocarbon alternatives in these locations, with subsidiaries like LIDL France committing to using only propane in all new builds. Meanwhile United States has seen a much slower transition. In North America, the first natural refrigerant installation took place 11 years after Europe’s leaders. Some of the largest U.S. grocery retailers still do not operate a single HFC-free store. Simply put, there is no excuse for this lag; consumer demand could be a powerful tool to ensure adoption of climate-friendly refrigerants, a necessary step to mitigate the climate crisis.

More about this map:

Users can explore this map to not only see whether there are HFC-free stores in their zip code, their city or their country, but they can also see which companies have such stores and encourage progress globally. Stores that use HFC-free refrigeration are distinguished from those that rely on hybrid systems (HFC and a natural refrigerant), symbolized by green and orange respectively. While hybrid stores still contain HFCs, in many cases they have been partially converted to use climate-friendly alternatives representing an interim improvement until the entire system can be replaced. With over 260 stores and counting, this map highlights those supermarkets actively addressing the climate effects of their cooling.

It is important to note that this map is currently seeking input, and far from comprehensive. We encourage further submissions, particularly in markets where actual adoption of HFC-free technologies is currently under-represented in our data. This includes the European Union, Japan, and Canada where there have been significant uptake of natural refrigerants, that is yet to be reflected in the map. 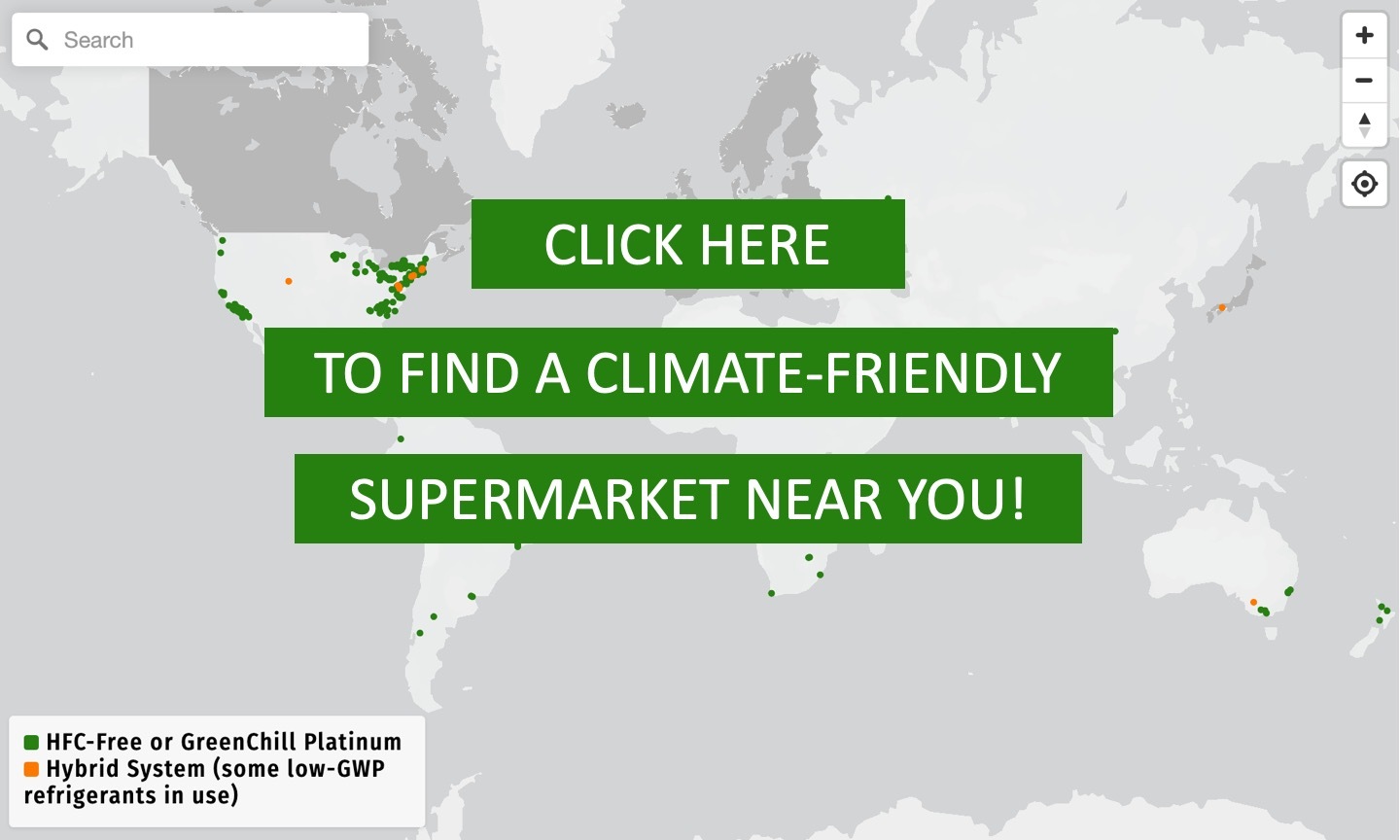 On the first Earth Day 50 years ago, some 20 million Americans flooded the streets to protest environmental crises, spurring the environmental movement of today. Half a century later, the streets are empty today, as we find ourselves at home in quite uncertain times. Still – today, as every Earth Day this past half-century – our actions are important.

Addressing emissions of super-polluting coolants like HFCs was identified as the top climate mitigation action in the 2017 book, Drawdown: The Most Comprehensive Plan Ever Proposed to Reverse Global Warming, that ranked currently available climate-change mitigation technologies and practices based on their ability to reduce greenhouse gas emissions between 2020 and 2050. In a 2020 update, Drawdown estimates that together, by addressing refrigerant management and alternative refrigerants we could reduce more than 100Gt of CO2e emissions. This Earth Day, we can do our part by supporting supermarkets who are actively addressing their use and emissions of HFCs.

Supermarkets are encouraged to submit their climate-friendly store location information via our submission form and template.