As exports and imports worldwide are estimated to be at their lowest levels in four years due to the impact of COVID-19, Ghana, a key epicenter of the rosewood trade in West Africa, is no exception to this trend. International trade data shows that Ghana’s volume of timber exports are also at a 5 year low, due in part to interruptions in the trade caused by the global coronavirus pandemic. However, a detailed analysis into what lies behind the starkly decreased numbers in Ghana-China rosewood trade data over the past few months indicates that changes in governance and enforcement in the timber sector appear to have strongly contributed as well.

Recent global trade data shows that rosewood exports from Ghana into China dropped by about 90 percent since July 2019, when the Environmental Investigation Agency (EIA) released a groundbreaking report, BAN-BOOZLED: How Corruption and Collusion Fuel Illegal Rosewood Trade in Ghana. In the aftermath of the report, efforts by China and Ghana alongside international campaigns to end the illegal trade appear to have contributed to the extreme reduction in exports over the past year. As both countries are easing their lockdowns, and traffickers are looking at opportunities to make a quick profit again, we urge both governments to maintain and increase their efforts to eliminate the illegal rosewood trade and its consequences on livelihoods, fragile habitats, and global climate.

EIA ‘s report revealed how despite a comprehensive ban on harvest, transport, and export in place since March 2019, the dry forests and rural communities of Ghana are still the victims of rosewood plundering. EIA estimated that since 2012, over 540,000 tons of rosewood – the equivalent of 23,478 twenty-foot containers or approximately 6 million trees – were illegally harvested and imported into China from Ghana while bans on harvest and trade have been in place. EIA’s investigation documented a massive institutionalized timber trafficking scheme, enabled by high-level corruption and collusion in the forestry sector. As the West African rosewood species has been protected by the Convention on International Trade in Wild Species of Fauna and Flora (CITES) since 2017, the illegal trade also raised serious questions about Ghana’s implementation of the international convention.

A series of important events have happened since EIA’s report was released: Ghanaian citizens and civil society, following on their long-lasting campaigns against forest destruction, expressed outrage at the illegalities taking place, while media around the world and in Ghana covered the investigation extensively and demanded answers. In response, Ghana’s Ministry of Lands and Natural Resources created the Committee to Investigate Allegations of Corruption in Rosewood Trade in Ghana at the end of August 2019. In December 2019, Rainforest Rescue launched a petition demanding the European Commission to place pressure on Ghana to enforce timber legality and end the illegal rosewood trade, which gathered over 138,000 signatures from concerned citizens worldwide. EIA launched Rosewood Revealed, a web tool created to enable Ghanaian citizens to know the quantity and value of illegal rosewood imported into China from Ghana every month. 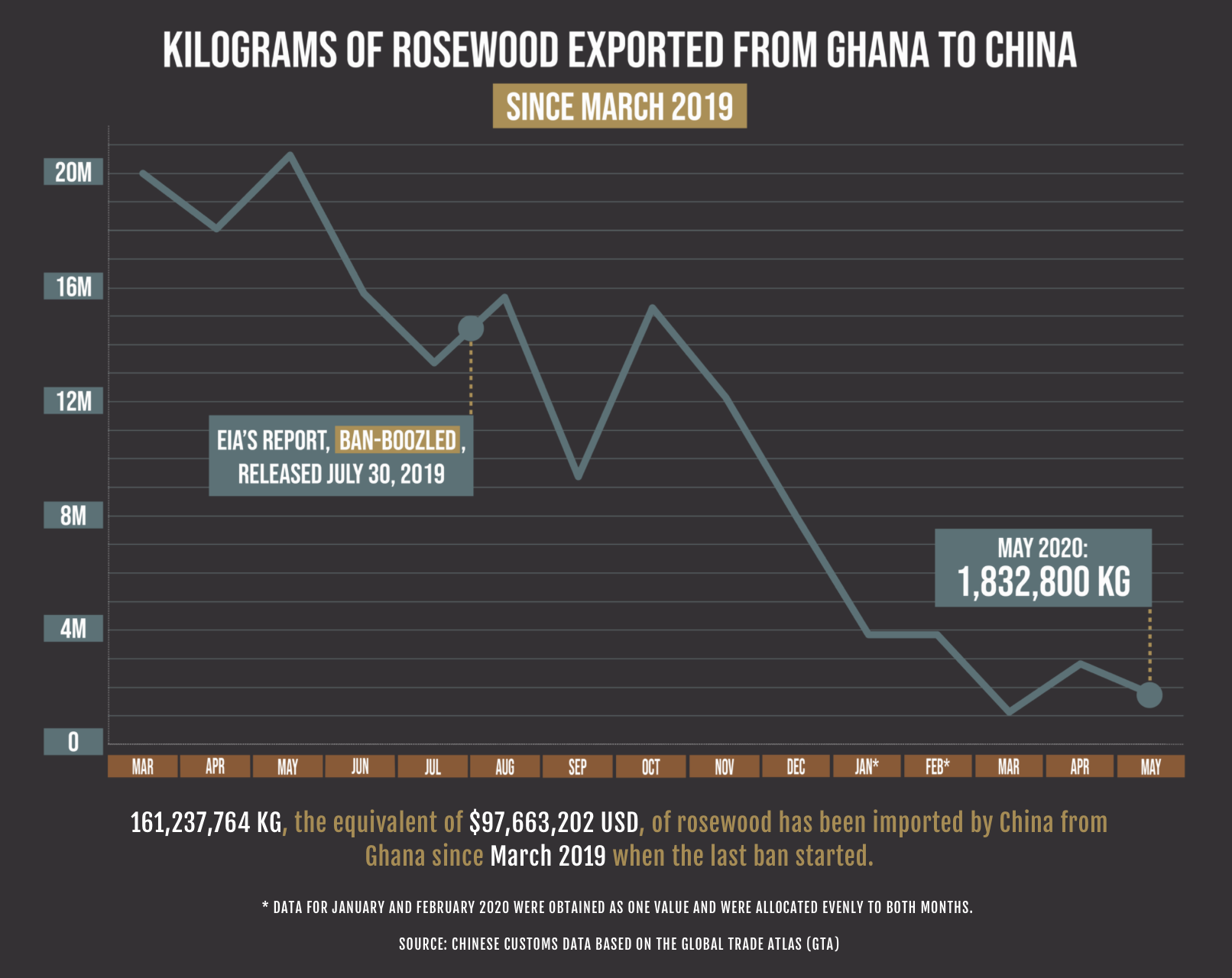 As demonstrated in the graph, Ghana’s exports of rosewood have been reduced to only a fraction of what they were a year ago. Approximately 1.8 million kilograms of rosewood (valued at around USD $1.5 million) from Ghana entered China in May 2020, whereas Ghana’s rosewood imports to China were valued around USD$20 million per month around the same period in 2019. This is very positive news; yet with a national ban that covers harvest, transport, and export of the timber, the trade should be close to zero.

In Ghana, civil society and journalists for several years rang the alarm on the illegal trade and were relentless in keeping the issue alive in public debate. In addition, according to the information collected by EIA investigators, the reduction in illegal exports was also driven by Chinese authorities increasing oversight and enforcement of CITES rules. EIA investigators were informed that in late 2019 Chinese authorities carried out a series of operations that led to the arrest of many traders and importers involved in the West African rosewood business. Because of the frequent use of invalid and forged CITES permits, authorities in China have multiplied monitoring efforts for examining CITES documents that are presented for the import of rosewood from West Africa and in particular Ghana.

However, more needs to be done in order to stop the rosewood (Pterocarpus erinaceus) traffic between West Africa and Asia, in particular China, the largest importer of this species in the world. Article 65 of the new Chinese Forest Law provides an important new opportunity for China to stop illegal timber from entering the country and to ensure that those involved in the illicit trade are held accountable.

Rosewood trafficking in Ghana is a major governance issue and reflects the lack of enforcement of environmental laws. Ghana possesses the authority to stop the illegal rosewood trade almost instantly by establishing a zero export quota for the species under CITES and giving notice to all CITES Parties, including China, who would have the obligation under the Convention to stop any shipment reaching their shores. In the coming months, Ghana is set to become the first African nation and the second country in the world to issue Forest Law Enforcement, Governance, and Trade (FLEGT) timber licenses under its Voluntary Partnership Agreement (VPA) with the European Union (EU). The country can utilize the opportunity to further progress in ending the illegal rosewood trade by ensuring that rosewood (Pterocarpus erinaceus) is brought into the FLEGT system’s timber legality standards.

Yet in the midst of this progress and opportunity, there have been reports of environmental defenders receiving threats of physical violence due to speaking up against the trade, and even Ghana’s own Minister of Lands and Natural Resources had his car damaged by rosewood traffickers after chasing them in his vehicle. With the recent establishment of The Savannah Regional Coordinating Council, a council of traditional leaders and civil society aiming to preserve forests in northern Ghana against illegal logging, the government should amplify and support these local initiatives in implementing on the ground monitoring to protect communities from illegal deforestation to counter these trends.

Ghana just announced that the country considers “COVID-19 to be a wakeup call” in adapting to climate change and is embarking on a three year plan to build resilience. A key indicator of Ghana’s ability to adapt to climate change will be its ability to end the illegal plunder of its precious dry forests, as these forests are a major absorber of carbon emissions and help to regulate ecosystems. Even as progress is made to reduce the illegal rosewood trade, reports from the field highlight that some traffickers are taking advantage of decreased enforcement presence in the forests during the COVID-19 pandemic to cut down rosewood unabatedly, with anticipation that ports and trade will open up soon between Ghana and China.

If Ghana is serious about ending illegal deforestation and adapting to climate change, and if China is committed to enforcing timber legality, now is the time where the two countries have a unique opportunity to stop these trafficking plans in the making and end the continued cycles of destruction.