The Natural Resources Defense Council (NRDC), the Environmental Investigation Agency (EIA), and the Institute for Governance & Sustainable Development (IGSD) launched a joint report today laying out a path to capture planet-warming fluorocarbon gases from inside old air conditioners and refrigerators, an effort that in the U.S. could stave off as much climate pollution as two years of President Biden’s 2030 emissions target through the end of this century. 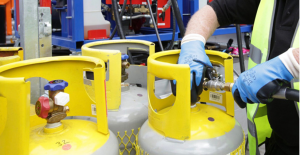 Even as the world moves to climate-friendlier refrigerant gases under the Kigali Amendment to the Montreal Protocol, a huge and still-growing legacy of old, climate- and ozone-layer-damaging gases continues to amass in equipment around the world.

Refrigerant gases such as hydrofluorocarbons (HFCs) and their predecessors circulate in appliances and cool their surroundings. But they also tend to leak out into the atmosphere during use or at the end of the appliance’s life. Pound for pound, HFCs warm the climate hundreds to thousands of times as much as carbon dioxide, and earlier generations of refrigerant gases also have significant ozone depletion potential.

To help avoid those emissions, we took a soup-to-nuts look at the industries that use fluorocarbons in a bid to find the best intervention points for getting old fluorocarbons recovered and reused or properly disposed of. We identified six key pillars to robust Lifecycle Refrigerant Management (LRM):

The time is ripe for action to advance LRM across sectors and levels of government. In the U.S., the Environmental Protection Agency (EPA) has just been equipped with comprehensive authority to address remediation of existing HFCs under the American Innovation and Manufacturing (AIM) Act of 2020. EPA has stated it plans to issue a proposal addressing HFC leaks and promoting reclamation (recycling and reuse) of HFCs by summer of 2023 and to finalize its proposal a year later, and just last week issued a request for information on the national market for recovery and reclamation of HFCs and other fluorocarbons.

Success on Lifecycle Refrigerant Management will take far more than federal action; it’ll take collaborative efforts by a great many actors to send clear and unambiguous signals to refrigerant markets that LRM should be a policy priority and a central tenant of corporate ESG initiatives. For example, companies higher up the supply chain will have to take greater responsibility for the environmental fate of the gases they make and use in their products. It’ll also take developing the HVACR workforce to mainstream recovery best practices and changing the economics of recovering old refrigerant gas. State environment offices and legislatures will also play a key role in piloting novel programs to boost recovery.

For now, recovering and reclaiming – the formal term for bringing old, used fluorocarbons back to virgin quality – is a no-regrets strategy to reduce the demand for HFCs nationwide. Reclaiming creates a steady supply of used HFCs that don’t count against the national HFC limits in the AIM Act, thereby helping the U.S. meet its steep HFC reduction obligations under that program. In fact, EPA kickstarted a rulemaking today revisiting the agency’s methodology in allocating HFC allowances to companies between 2024-2029, as the phasedown progresses. This proposed rule is among several EPA regulations that put the U.S. in compliance with our international obligations under Kigali. We also expect to soon see a proposed regulation, currently under review at the Office of Management and Budget, that will limit the use of HFCs from specific sectors of the economy such as air conditioning and refrigeration.

As it becomes increasingly the norm, better lifecycle refrigerant management will also open up the doorway to accelerating the phasedown: as more and more of the economy’s refrigerant needs are met through reuse of old HFCs, less must be met by new production.

NRDC, EIA, and IGSD will hold a side event on this topic at the Montreal Protocol’s annual Meeting of Parties on November 1st and we look forward to discussing our plan with government and industry stakeholders alike in the months ahead.

The climate imperative and opportunity to address lifecycle management of refrigerants is clear, and working together to implement a comprehensive approach, it’s one we can realize.