The alarming extermination of Kruger National Park’s rhinos is the result of the intense poaching pressurerhino have faced across southern Africa over the past decade. Most rhino horn acquired from poaching is destined for Vietnam and China, which are linked to 31 percent and 30 percent of total rhino horn seizures, according to EIA data.

While it was no secret that Kruger’s rhinos were getting hammered by poaching, the full extent of the losses was unclear until these new population figures came to light. Transparency surrounding rhino population numbers in South Africa has been an issue for several years. South Africa’s Department of Environment, Forestry and Fisheries (DEFF; previously the Department of Environmental Affairs or DEA) typically provides biannual updates on the government’s rhino conservation efforts, but tends to focus these updates on poaching figures and has consistently failed to release annual rhino population estimates. This latest data on Kruger’s rhino population was buried 96 pages into SANParks’ 2019/2020 annual report.

DEFF’s desire to focus on poaching is understandable: the number of rhinos poached in South Africa has declined annually since 2016, which is certainly a positive development after seven years of skyrocketing poaching rates. However, South Africa’s poaching figures must be considered together with up-to-date rhino population estimates to make an accurate assessment of how rhinos are weathering the poaching crisis. 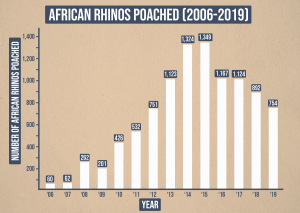 The Kruger National Park white rhino population data places South Africa’s declining rhino poaching figures into a sobering context. Even as the overall number of rhinos poached throughout the country declined, South Africa’s most important rhino population consistently bore the brunt of the killing at a rate that outpaced rhino births in the park.

Severe rhino poaching has not been limited to Kruger National Park. In neighboring Botswana, the white and black rhinos living in the Okavango Delta have been under siege from poachers since late 2018. Nearly all of the country’s black rhinos were wiped out before the government made the drastic decision to capture and relocate all remaining black rhinos to a secure location. At the same time, the government embarked on an ambitious operation to remove the horns (which grow back) from the Okavango Delta’s white rhinos. It is unclear how effective this dehorning exercise has been to curb poaching in the Okavango as there have been reports that dehorned rhinos continue to be targeted by poachers. Similarly, while poaching numbers were on the decline in South Africa, Zimbabwe experienced consecutive years of increased rhino poaching from 2017 through 2019.

While some progress has been made in recent years to reduce poaching for some rhino populations (especially for black rhinos, whose population has actually managed to increase slightly in recent years, particularly in Kenya and Namibia) and improve enforcement, the illegal rhino horn trade clearly continues to pose an existential threat to wild rhinos and much work remains to secure and recover rhino populations throughout their range in Africa and Asia.