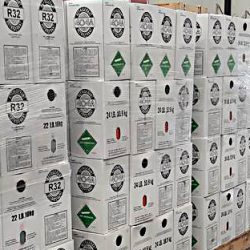 Against the backdrop of the booming and prosperous drug trade of the 1990s, a lesser known but also lethal black market was emerging from an unfamiliar source – gases that caused the hole in the ozone layer. At the same time ozone-destroying chlorofluorocarbons (CFCs) were being phased out globally, CFCs were flooding into the United States illegally. A senior DOJ prosecutor reported that CFC busts at the US-Mexico border were second only to marijuana in the value of goods seized. A cylinder of CFCs yielded a 13 to 1 profit, with a street value that nearly matched that of cocaine. Rampant criminal trade in these dangerous chemicals wreaked havoc around the globe.

We are in danger of the same thing happening again – this time for hydrofluorocarbons (HFCs). HFCs are powerful climate-forcing pollutants used primarily in refrigeration. In the near term they are hundreds to thousands of times more climate-damaging than carbon. The recent Intergovernmental Panel on Climate Change report underscores the urgency of phasing out these climate super-pollutants, and Congress directed EPA to do just that.

There is good news and bad news.

The good news is that EPA’s proposed rule to slash HFCs is equal to the task. EPA marshalled the power of information technology and strong compliance design to cut illegal imports off at the pass. EPA’s draft rule requires real time checks at the border, so illegal products can’t get in. It bans disposable containers, the favored vehicle for smugglers. And it tracks shipments and product throughout the supply chain using widely available QR codes, which make criminal activity much harder and also arm buyers with the ability to avoid unlawful products. EPA’s proposal would make it much more difficult to cheat, and far easier to find cheaters and hold them to account.

The bad news is that despite widespread industry support for EPA’s rule, a handful of companies are pushing back. Their challenges threaten to undermine the rule. They are opposing EPA’s sensible and necessary controls, citing near term costs. They want to retain the kind of containers that smugglers prefer. They want to skip the QR codes, even though these are in wide use already. Their short-sighted focus on saving a few dollars now would open the floodgates to a black market that could swamp the climate advantages of this can’t-wait regulation. The math doesn’t add up: tiny cost savings that put billions in climate benefits at risk.

We’ve seen this catastrophe unfold before. Europe’s HFC phasedown is being overrun with unlawful products. Best estimate is that illegal imports are already 30% of the legal supply, and that’s expected to grow as tighter controls kick in. If the US experience with illegal HFCs tracks Europe’s, that’d be equivalent to adding at least 12 million cars to US roads.

EPA has to stick to its guns on the HFC rule, scheduled to be finalized this month. If the final rule waters down the compliance-forcing provisions to suit the short-term preferences of a few, the US will undoubtedly face the same compliance debacle Europe is confronting now. It will be CFC redux. Runaway climate impacts from the inevitable black market will be impossible to rein in. EPA got it right in the proposed rule. Let’s keep it that way.

Cynthia Giles served as the Assistant Administrator of EPA’s Office of Enforcement and Compliance Assurance during the Obama Administration. Alexander von Bismarck is the Executive Director of the Environmental Investigation Agency, U.S., eia.org.