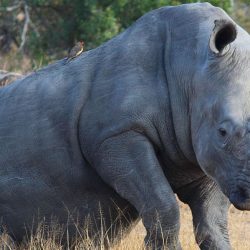 Law enforcement officials from around the world have seized illegal supplies of rhino horn at least once a week on average for the past 10 years. The type of seizure ranges widely. It could be a pair of fresh horns confiscated from poachers who just gunned down a rhino inside a national park. Or possibly dozens of horns were discovered cleverly hidden in an air cargo shipment. Sometime it’s just a few grams of powdered horn found in a traveler’s luggage. Maybe a mix of raw and carved horns was seized after a police raid on a trafficker’s home.

The rhino horn in all these scenarios becomes critical evidence for prosecutors to use in securing convictions for wildlife trafficking. If arrests are made following a rhino horn seizure, oftentimes it is only the individual who was caught in possession of the horn that is prosecuted. Other perpetrators, including individuals belonging to organized criminal networks, who sourced, trafficked, and profited from the sale of the rhino horn are left to continue their business as usual. But law enforcement officials have a powerful tool at their disposal that can help uncover others who form links in the illegal rhino horn trade chain: DNA analysis.

In recent years, major rhino horn consumer countries like China and Vietnam have made significant seizures of large quantities of rhino horn. For instance, in June 2019, the China Customs Anti-Smuggling Bureau seized nearly 250 kg of rhino horn after intercepting a ship that had traveled halfway around the world from Mozambique. In December 2020, Vietnam seized 93 kg of rhino horn in a warehouse near Tan Son Nhat International Airport. In these and other major rhino horn trafficking cases, the authorities extracted DNA samples from the seized horns and sent them to South Africa for analysis.

Why South Africa? Because South Africa is home to the most comprehensive rhino DNA database on Earth. Known as RhODIS (short for Rhino DNA Index System), this database is managed by the University of Pretoria’s Veterinary Genetics Laboratory and contains thousands of DNA samples from rhinos located throughout Africa. DNA can be extracted from just a couple grams of powdered rhino horn and successfully matched with a sample recorded in RhODIS. If a match is made, it can link the seized rhino horn — and the poachers and traffickers — to rhinos poached at a specific location or horn taken from a specific stockpile, providing airtight evidence to support prosecutions and key data to better understand important poaching and rhino horn trafficking trends.

The Convention on International Trade in Endangered Species of Wild Fauna and Flora (CITES), which regulates international trade in wildlife, has adopted a resolution on rhino conservation that urges the world’s governments to collect samples of seized rhino horn for forensic analysis, and at CITES meetings South Africa has practically begged countries to send them DNA samples to facilitate enforcement action. South Africa has received rhino horn samples from at least a dozen countries in Africa, Asia, and Europe, and some, such as Vietnam, have held public awareness events to commemorate the sharing of rhino DNA samples with their South African counterparts.

But once South Africa obtains the samples it is unclear how DNA analysis is used to advance investigations and what, if any, subsequent prosecutions have resulted. In its biannual update on efforts to combat rhino poaching, South Africa’s Department of Forestry, Fisheries and the Environment (DFFE), which works closely with SAPS to combat rhino poaching, does not report on how DNA from rhino horn seized abroad was used to inform intelligence-led investigations into the criminal networks that fund poaching and control the trade in rhino horn or whether any such investigations resulted in prosecutions.

Similarly, neither DFFE nor SAPS provides public reports on where rhino horn seized abroad comes from and how sources of horn may be changing over time. There has been growing speculation that horn derived from stockpiles is increasingly being trafficked abroad (at least 50 tonnes of stockpiled rhino horn can be found in South African safes and storerooms alone). This is due in part to the physical characteristics of horn seized abroad, some of which shows signs of regrowth after dehorning, as well as the sheer volume of horn in trade compared to the number of rhinos poached annually.

But without thorough DNA analysis and government transparency we’re left with more questions than answers. If horn that grew back after a dehorning operation was seized abroad, was the horn obtained from a poached rhino or from a stockpile where the horn was stored? If it did come from a stockpile, was it owned by a government entity or a private citizen? And was the horn stolen from the stockpile, or did someone with access to the stockpile sell the horn to traders illegally? Or could the horn have been sold legally within South Africa and then smuggled abroad?

A combination of forensic analysis, intelligence-led investigations, international cooperation, and a commitment to transparency is required to answer these questions, which in turn would inform policy and law enforcement decisions that respond effectively to the dynamic modus operandi of rhino horn traffickers.

DNA analysis can be a powerful enforcement tool in the fight against rhino-related crime, as South Africa has shown through its use in prosecuting domestic poaching cases. Governments around the world are demonstrating a willingness to share rhino horn samples with South Africa, which has the best data set available for conducting forensic analysis as well as a law enforcement apparatus capable of effectively acting on the results, including sharing key intelligence with their law enforcement counterparts abroad and their partner agencies at home like DFFE. However, South Africa has been puzzlingly silent about what it does with the rhino horn samples it receives from other countries, and two years ago SAPS made the baffling decision to sever its partnership with RhODIS despite the rhino poaching crisis showing no signs of abating.