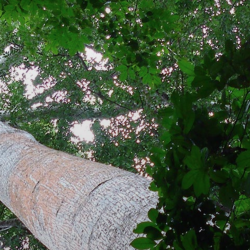 The new regulation would require companies to establish traceability back to the point where the commodity was produced, including “latitude and longitude of all plots of land where the relevant commodities and products were produced.”

In these debates, some European forest industry bodies have argued that GPS accuracy in the forest is still not sufficiently developed for GPS coordinates (latitude, longitude) to be a mandatory criteria under the new Regulation. Over decades of investigating and tracking illegal timber in forests around the world, EIA has seen that this is not the case.

This blog post aims to address these concerns, by looking at real-world data from Romania’s SUMAL timber traceability system, accessed via the Forest Inspector transparent public portal. Since 2014, all timber transport permits in Romania are required to be issued using a mobile application. The starting point of each truck’s journey is represented on the Forest Inspector map as a single point, with GPS coordinates pulled from the user’s smartphone.

EIA has used data from the public Forest Inspector system to assess the accuracy of GPS coordinates in the forest. Our study indicates that GPS on mobile devices in forest areas is highly accurate.

We collected the start points for hundreds of timber transports linked to five harvest permits (APVs) in different parts of Romania. The points in this data represent the GPS coordinates taken by the cell phones of users — logging company officials — when they request a timber transport permit to move a truckload of logs, boards or chips. Each point is registered at the time a single transport is made; so the points seen in these images were made over a period or weeks or months. The images below show all of those transport start points on a satellite image of the area.

In this image, you can see that nearly all of the points fall in a very tight cluster around what’s presumably the loading site.

In this case, we can see two distinct clusters — one around the loading site, and one at another point on the main road. It’s unclear what the second site is or how it’s being used — it appears to be a big parking lot in front of a village house. But it is clear that the GPS accuracy is quite good — even when the company might not be following the law.

Here too we see two distinct clusters — in this case, they’re both next to the harvesting site, so it seems the company used two different loading sites to extract logs from this forest. Here, we see points spread out along the road leading down from the forest. It appears that the company might be filling in the transport permits from the truck while it’s already driving. It does seem to prove the accuracy of the GPS coordinates though, as they all fall mostly along the road.

Even though this cluster is spread out more than some of the others, we see that it also lies along the road, and in two general clusters — presumably around two loading sites used for logs from the same forest.

What these clusters of points show is that the GPS from the users’ cellphones are amazingly accurate and consistent. In some cases, like with many of the points near the top of #4, we do see increased variation, such as points falling away from the road. We believe that this happens when users do not have the GPS on their cell phones turned on and are using cellular reception only, or if the users turn on the GPS only at the time when the GPS coordinates are requested — in this case the coordinates can be seized before the GPS has had time to calibrate.

Beyond this real-world test, numerous academic publications have already studied the accuracy of GPS on various devices, including smartphones. One such paper tested cell phone accuracy in Slovakian forests:

Accuracy evaluation was conducted at 74 points in a mixed deciduous-coniferous forest (during leaf-on and leaf-off season) and additionally at 17 points under open area conditions. Total station theodolite measurements served as a reference for all point positions. Positional accuracies of three smartphones (one with two differing OS versions), a tablet, a mapping- and a survey-grade receiver were compared. Root mean square errors of positional accuracies ranged from 4.96–11.45 m during leaf-on and 4.51–6.72 m during leaf-off season in the forest plots to 1.90–2.36 m under open area conditions.

GPS signal variation is not confined to forest areas. Tall buildings and other obstacles also cause similar signal reflections in urban areas. Cell phone software accounts for these variations by pulling location data from a collection of sources and then calculating an estimated accuracy. This accuracy measurement is returned alongside the latitude and longitude values on both Apple and Android phones, letting developers adjust their apps accordingly by ignoring low-accuracy measurements or displaying an accuracy indicator for the user (e.g. the “blue circle” on map applications). Cell phones can balance speed and accuracy by sending several location estimates in succession, starting with a more general location and then calculating more precise estimates soon after. Developers can then choose the location data best suited for their needs — whether it be displaying driving directions, locating a 911 caller within a building or finding the position of a logging truck in a forest.

EIA’s study of data from Romania’s SUMAL system, in constant operation for all timber transports in the country since 2014, combined with the academic literature, provides clear evidence that GPS coordinates in forest areas show remarkable levels of precision, when the devices are used correctly. This shows that there are no significant technical barriers to the provision of GPS coordinates of forest areas, and that it is perfectly reasonable for the new European deforestation-free products regulation to require provision of GPS coordinates by importers, traders and their suppliers. Traceability to the harvest site is critical to the success of the EU’s proposed deforestation regulation. Evidence from Romania’s forestry sector shows existing geolocation technologies are up to the task.