In a jarring photo worth a thousand words, Japan’s Ambassador to Zimbabwe, Satoshi Tanaka, holds a large elephant tusk from Zimbabwe’s stockpile, which he toured last week. The image crystallizes EIA’s concern that Japan continues to be perceived as a potential buyer for any wishful future international sales of ivory. 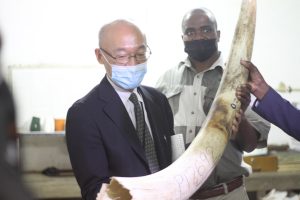 Before Zimbabwe’s African Elephant Summit in Hwange this week, officials from the Zimbabwe National Parks and Wildlife Management Authority gave ambassadors from Japan, China, European Union countries, United States, and United Kingdom a tour of their ivory and rhino horn stockpiles as part of an effort to lobby nations for support for an international sale. The Summit’s attendees include representatives from select elephant range states, as well as China and Japan. It’s notable that not all African countries, or even all 37 elephant range states, were invited to a summit with the goal of finding an African “consensus” on ivory trade. The Environmental Investigation Agency and 49 other NGOs issued a statement condemning Zimbabwe’s Elephant Summit.

Under the Convention on International Trade in Endangered Species of Wild Fauna and Flora (CITES), international commercial trade in ivory was banned in 1989. After the international commercial trade in ivory was banned, demand for ivory dropped, poaching decreased, and African elephant populations were able to rebound in many areas. However, the ban was undercut by thriving domestic markets and two later permitted “one-off” sales of ivory, one to Japan in 1999, and then one to Japan and China in 2008. After the second sale, poaching increased again dramatically. Another “one-off” sale, like what Zimbabwe is pushing for, would negate the global efforts to stop the poaching to supply the trade in ivory.

Zimbabwe’s courting of CITES Parties is unsurprising given Zimbabwe’s longstanding interest in opening international ivory trade. However, the European Union, United States, United Kingdom, China, and others have all acted to close their domestic ivory markets to protect elephants from the trade in ivory. On the stockpile tour, the European representatives in attendance noted that the ban on international trade in ivory is meant to curb criminal syndicates – they clearly do not support lifting the international ivory ban to enable a sale of Zimbabwe’s ivory stockpile. As the last ivory market of significance, Japan’s open ivory market is being targeted by nations, like Zimbabwe, wanting to sell their ivory stockpiles.

Japan’s longstanding demand for ivory drove the downfall of Africa’s elephants in the 1980s and remains a threat today. Japan is currently the world’s largest legal ivory market, with a massive stockpile and thousands of ivory manufacturers, wholesalers, and retailers. To continue its domestic ivory trade, eventually Japan will need more ivory. As a non-range state, Japan is not home to wild elephants, so all ivory in Japan was/would be sourced from another country’s elephants.

For decades EIA has documented how the trade in ivory is incompatible with the conservation of elephants – our evidence is clear that there is no such thing as a regulated trade. In Japan, our investigations and analyses illuminate Japan’s façade of control, which enables the trade in illegal ivory and illegal export. EIA and allies have been urging Japan, as well as Tokyo independently, to take urgent action to close the markets and take a stand to protect elephants. The Governor of Tokyo initiated an ivory trade assessment process in early 2020, which involved a panel of experts’ assessment. Recommendations from the consulted Council include the consideration of legal measures to address with the ivory trade within the Tokyo jurisdiction. In contrast, the national Government of Japan continues to enable and support its ivory market and traders.

The photo of a Zimbabwean tusk in the arms of Japan’s Ambassador Tanaka rings a bell in two ways: excitement for those wanting to sell ivory who see an interested country representative, and grave concern from those who want to protect elephants from trade.

As long as Japan’s domestic market remains open, Japan is sending a signal that it supports the trade in ivory, and nations like Zimbabwe hear that loud and clear.