It’s the middle of summer and your air-conditioner is cranked to the max while your refrigerator constantly works to fight off the incoming heat and humidity. While relaxing in that cool breeze from your AC and drinking that refreshing beverage, your climate may feel just right, but what you may not realize is that the synthetic refrigerant gases behind the cooling scene are some of the most potent greenhouse gases in the world. The Environmental Investigation Agency (EIA) has been working to phase-out these dangerous gases and is proud to announce a new report focused on HFC-free climate-friendly technologies, Putting the Freeze on HFCs: A global digest of available climate-friendly refrigeration and air-conditioning technologies.

Today, HFCs are the most commonly used refrigerants in refrigeration and air-conditioning systems in the United States and are increasing in use exponentially in developing countries. These gases have global warming potentials (GWPs) ranging from hundreds to thousands of times higher than carbon dioxide (CO2). HFCs were commercialized to replace ozone depleting refrigerants, which have been or are currently being phased-out under the Montreal Protocol on Substances that Deplete the Ozone Layer. Reducing production and consumption of HFCs is the largest, fastest, and most cost-effective short-term climate mitigation option currently available and will have significant effects on the planet by 2050.

Using more than 100 case studies and companies, this report extensively illustrates HFC-free technologies applied throughout the developed and developing world. The report describes refrigeration and air-conditioning technologies around the world that use hydrocarbons, carbon dioxide, air, water, ammonia, and “not-in-kind” technologies (e.g., solar) instead of HFCs. The report is also a tool for readers—in particular government officials, HVAC&R managers of commercial buildings and grocery stores, and consumers looking for climate-friendly cooling options—to draw information on HFC-free technology.

Not only do these technologies directly mitigate “super” greenhouse gases, but they also have huge energy efficiency co-benefits. For example, a CO2 refrigeration system in a store in Jakarta, Indonesia—a city with an average annual temperature of more than 80oF (27oC)—is showing energy efficiency gains of up to 39 percent compared to a traditional HFC refrigeration system. As the world looks to find energy efficient equipment that reduces energy demand and greenhouse gas emissions, converting to HFC-free refrigeration and air conditioning holds huge and immediate promise. With climate regulations being passed in the EU, United States, and Japan, and an imminent international phase-down of HFCs, HFC-free technologies are the one-stop solution. This report corroborates that the time to transition to natural HFC-free technology is now. 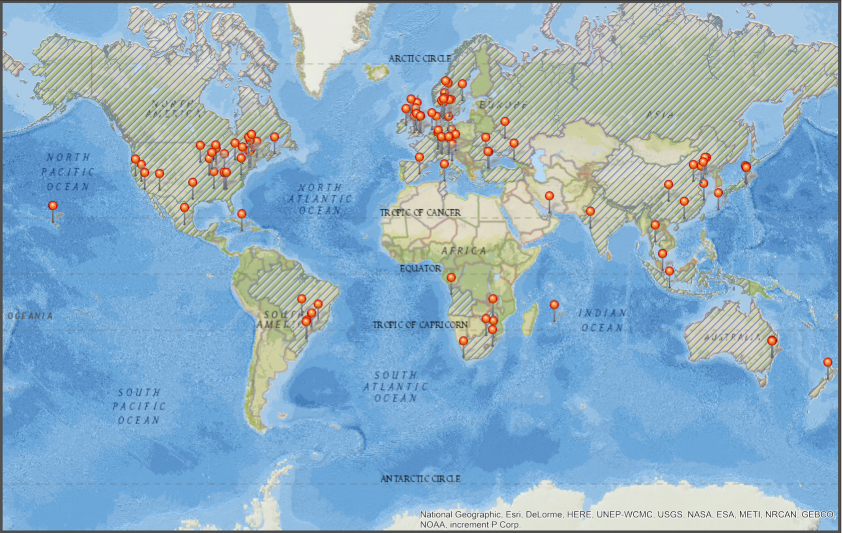 Above: Geographical spread of HFC-free technologies in EIA’s Putting The Freeze on HFCs report.

Mark W. Roberts, Senior Policy Advisor at EIA, says, “HFCs are the fastest growing greenhouse gas emissions in the world and can account for 20 percent of all greenhouse gases by 2050 if action is not taken. By summarizing HFC-free technology in different climates and regions, this report demonstrates that phasing-down HFC consumption on a global scale is now possible.”

EIA International Climate Policy Analyst, Avipsa Mahapatra, adds, “As developing countries like India and Brazil begin to transition from using ozone depleting substances, they have the tremendous opportunity to leapfrog high-GWP HFCs by transitioning to energy efficient climate-friendly natural refrigerants, thus saving billions of tonnes of CO2 equivalent emissions. This way, in addition to having direct climate change mitigation benefits, these countries can reap energy efficiency benefits over time, and avoid a treadmill of patented chemicals.”

Climate Policy and Research Associate at EIA, Lowell Chandler, also adds, “As the largest consumer of HFCs, the U.S. must greatly increase HFC-free technology installations across all sectors domestically. Many of the companies in this report are based in North America, yet the U.S. is far behind developed countries and even some developing countries when it comes to transitioning to HFC-free technology. With President Obama’s Climate Action Plan specifically targeting HFCs, and proposed EPA regulations focusing on phasing-down certain HFCs, the U.S. market for HFC-free technology is poised for rampant growth.”