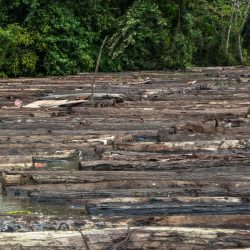 The Russian Far East (RFE) contains the world’s last major strands of old-growth temperate forests, a unique, biodiverse ecosystem which is home to the last 500 Siberian tigers in the wild. EIA’s investigative reports detail how demand for hardwood furniture and flooring in the United States, the European Union (EU), Japan, and China have fueled corruption in eastern Russia and created an illegal logging crisis. EIA reports have documented illegal Russian timber in furniture sold at Walmart, in oak flooring sold by Lumber Liquidators, and in structural lumber for housing construction in Japan.

In the Russian Far East, protected forests targeted by illegal loggers, because valuable hardwood stocks in forests zoned for timber harvesting are running out, after decades of extensive logging. Illegal logging in the region harms local communities and wildlife, and threatens the long-term economic future of Russia’s most remote regions. EIA’s Liquidating the Forests report found that in 2010 alone, illegal logging cost the RFE economy nearly four billion rubles (US $131 million, at 2010 values) in lost revenue and resources. Experts estimate that these figures, based only on officially registered losses, represent as little as 10% of actual illegal logging—the total losses could be over US $1 billion per year.

Based analysis of trade data and conversations with numerous businessmen throughout eastern Russia, EIA estimates that as much as 80% of the timber harvested in eastern Russia is done so illegally.

Export-based sawmills and trading companies buy the majority of their timber from small logging brigades, which steal timber from public lands, protected areas, or private concessions. Sawmill owners interviewed by undercover EIA investigators explained that they regularly bribed local forestry officials for fake permits to launder this illegally harvested timber. These exporters often transfer this timber through a series of shell companies to hide it from Russian financial authorities.

In 2012, 18 million cubic meters of logs, sawn timber, and veneer sheets were exported to China from eastern Russia. The same year, 96 percent of the RFE’s exports of valuable hardwoods – oak, ash, linden and elm – were destined for China. According to Chinese customs data, Russian timber made up 24% of China’s total timber imports by volume in 2015.

Since the mid-2000s, Chinese companies and workers have come to dominate the timber industry in eastern Russia. These foreign operators take advantage of high rates of corruption, illegality, and poor forest governance in eastern Russia to obtain high-quality, temperate wood at prices much lower than competing temperate timber producers, such as the U.S., Canada, EU, and New Zealand.

Hardwood flooring and furniture made from illegally logged Russian hardwoods fills store shelves around the world, where it is purchased by consumers unaware of its illicit origins. EIA conducted a multi-year investigation into the trade in illegal timber from eastern Russia, tracking this timber to China, and onwards to the U.S., EU, and Japan. The resulting 2013 report Liquidating the Forests, details this complex supply chain.

Evidence documented by EIA’s report significantly contributed to the U.S. Department of Justice’s (DOJ) enforcement of the U.S. Lacey Act in response to Lumber Liquidators’ imports of illegally sourced timber. In October 2015, Lumber Liquidators pleaded guilty to smuggling illegal timber, including one criminal felony count of entry of goods by means of false statements and four misdemeanor counts of violating the Lacey Act. The company will pay over $13 million in fines and penalties, making it the largest penalty ever levied under the Lacey Act. The U.S. DOJ found that Lumber Liquidators committed systemic fraud and sourced illegal timber from the Russian Far East and other high-risk countries.

Positive steps in Russia, but markets are key

In 2012, the Russian government began cracking down on the criminal syndicates behind illegal logging. Senior executives of the Russian timber company Beryozoviy, for example, were found guilty in 2014 of 15 counts of illegal logging and of participation in a criminal network. As EIA’s investigation revealed, Beryozoviy was a key supplier to the main Chinese manufacturer for Lumber Liquidators’ solid oak flooring. While these efforts like this are laudable and necessary, the fate of these rare forests remains in peril as long as international markets accept stolen Russian timber. Recent enforcement actions in the United States have sent a strong signal that the U.S. government is closing its market to stolen goods. However, greater action is needed in China, Russia’s largest trading partner for wood products, if there is any hope of saving Russia’s last unique eastern forests.