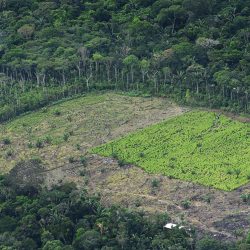 The United States Lacey Act, named after Iowa Congressman John Lacey, was originally passed in 1900, and its impacts have given it renown as the most successful conservation law. Initially aimed at combatting illegal wildlife trafficking, the Act made it a federal crime to poach game in one state with the purpose of selling it in another.

On May 22, 2008, after several years of successful campaigning by EIA and its allies, the U.S. Congress amended the Lacey Act to prohibit import and trade of illegally harvested plants, expanding the law to combat illegal logging and associated trade. The Lacey Act also requires importers to declare the genus, species, and country of harvest as well as other relevant information important to the timber or wood product’s origin, encouraging much greater due care and creating more transparency in the supply chain.

This groundbreaking law has created dramatic changes in the still heavily unregulated global wood products industry and led to systemic shifts in the practices of suppliers, manufacturers, and importers within the U.S. and around the world. Early success has helped spark similar policy reforms in other major timber consuming markets, including the European Union and Australia. More recently, Japan has also passed legislation designed to crack down on imports of illegal timber. The Lacey Act is a crucial tool to combat illegal logging and associated forest destruction worldwide, and an October 2015 study by the Union of Concerned Scientists confirmed that U.S. imports of illegal wood have declined significantly since the Lacey Act was amended in 2008, but significant amounts of illegal wood continue to enter the market. Much more remains to be done to solidify the market transformation that began with the law’s passage in 2008.

By facilitating the coalition of industry, labor, and environmental groups that helped make the 2008 amendments a reality, EIA is working to ensure the Lacey Act’s full implementation and enforcement under the law.