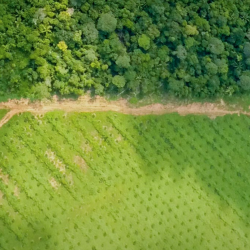 Traditional large-scale oil palm plantation operators in Indonesia and Malaysia, where over 85% the world’s palm oil is produced, are seeking fresh ground to grow, as available land in South East Asia becomes scarcer. Veteran plantation companies and new arrivals to the scene are on the hunt for land in Sub-Saharan Africa and Latin America, leaving countries scrambling to address the governance challenges this expansion brings, as global demand continues to increase.

An ingredient in snack foods and cooking oils, cosmetics and soaps, as well as some biofuels, palm oil is highly sought after and heavily traded global commodity. The crop’s thirst for massive water inputs and ample sunlight, however, mean that tropical, humid zones which characteristically contain rainforests, are frequently a target for growers. According to a 2014 report by Forest Trends, illegal, large-scale deforestation increasingly occurs as a result of conversion of forests to agricultural land to grow export commodities, often using loopholes in agricultural permitting processes which allow or involve less scrutiny for forest clearance.

Because the production and trade of palm oil as a global commodity requires both significant supply and nearby infrastructure to be refined into a tradeable good, the palm oil industry frequently grows quickly and at massive scale. Unfortunately, insecure land tenure rights of local communities, poor planning and oversight by governments, and corruption often combine to result in the expansion of oil palm plantations over forests and community lands and in violation of national law.

Oil palm production in Latin America has been associated, in many cases, with illegal expansion over forest areas and community lands, unauthorized deforestation, and even corruption.

Colombia, where access to rural land has been at the axis of a decades-long internal conflict, now produces the world’s fourth largest quantity of palm oil. Despite unresolved land claims from Colombia’s over six million internally displaced people, who have mostly been displaced from rural areas, Colombia has allowed farmland to be rapidly consumed by new oil palm plantations. Both Colombian companies and internationally-funded ventures have begun large cultivation operations in the country, seeking to meet international demand and doubling palm oil production between 2010 and 2015. EIA is working to support communities that have faced violent opposition from oil palm companies and other actors as they work to claim rights to their traditional land and preserve their environment.

In Peru, EIA is tracking the rapid expansion of oil palm plantations, largely over Amazon rainforest. Using Peru’s freedom of information laws in combination with analysis of international financial flows, EIA documented illegal deforestation of over 11,000 hectares of mostly primary forest between 2013 and 2015, and exposed planned expansion over tens of thousands of additional hectares of forests. Despite government commitments that oil palm development will not result in deforestation, EIA’s analysis shows that the current legal framework and enforcement environment is not sufficient to protect the country’s vast forests and millions of forest-dependent peoples.

Plans for oil palm production in the Congo Basin have been documented in several controversial cases across multiple countries, such as Cameroon, Gabon, and the Republic of Congo. EIA’s work seeks to understand the motivations and impacts of this often foreign-controlled industry by identifying the sources of financing and potential destinations of the timber originating from the mostly forested land where plantations are planned. Supporting civil society organizations and engaging in policy initiatives which govern expansion of oil palm and other agricultural commodities over forests will continue to be a focus for EIA in the region.

Growing demand for commodities is fueling a new wave of illegal forest conversion, at least half of which is carried out to produce agro-export commodities. With this undeniable evidence that global agricultural traders and food retailers impact forests locally, and the climate, globally, voluntary corporate commitments to commodity supply chain transparency and “zero-deforestation” have gained traction in recent years.

However, long term forest governance solutions require that national legal frameworks are enforceable and respected at the international level in order to successfully deter large-scale forest clearance for agricultural commodities. To adequately factor into corporate decision-making, legal consequences must constitute a significant risk to those operating outside of the law. For that risk to be significant, legal frameworks that govern forests must be strengthened and clarified, and consumer countries must change from a “no-questions-asked” attitude to compliance with responsible, careful sourcing practices in order to ensure imported goods are not illegally sourced.

EIA brings our evidence-based approach to policy debates that aim to address the global illegal trade in agricultural commodities. Agricultural commodity supply chain analysis and identification of the ultimate buyers will demonstrate the need for demand-side policy models similar to those developed for timber. EIA is focused on developing demand side prohibitions that address commodity flows and the financing for illegal agriculture expansion that incentivize and enable production of such commodities.