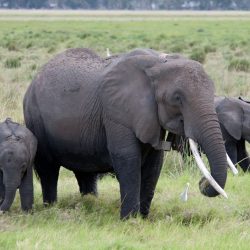 Poaching and trafficking of iconic species such as elephants and rhinos are recognized to be at crisis levels, devastating populations worldwide. The Convention on International Trade in Endangered Species (CITES) is an international agreement between governments that aims to ensure that trade in species doesn’t threaten their survival. The 16th Conference of the Parties (CoP16) came and went in March 2013 – so what happened for elephants and rhinos?

The elephant poaching crisis calls for serious action, and CITES ultimately provided very little. Devastated elephant populations began to recover after the 1989 ban, until a “one off” sale was permitted in 1999. Allowing “one-off” sales, evaluating so-called regulated ivory markets and discussing a potential trade in ivory have not worked to reduce poaching – in fact, they have only served to increase demand and the poaching it fuels.

CITES identified eight key nations required to submit action reports and deadlines to ensure progress in controlling the illegal trade by May 2013, including the supply states of Kenya, Tanzania and Uganda, the transit states of Malaysia, Vietnam and the Philippines and the consumer states of China and Thailand. These nations must demonstrate progress on their ivory action plans by July 2014. Failing to take action could result in CITES compliance measures, including sanctions such as trade suspensions. The main consumer states, China, Japan and Thailand –have failed to act to end the illegal trade for years, yet CoP16 did nothing to hold them accountable.

A massive amount of poached ivory is being laundered into the legal domestic markets in China Japan and Thailand. CITES actually permitted and even encouraged China’s domestic market by allowing a “one-off” sale of African ivory to China in 2008 – a decision that clearly ignited the massive surge in elephant slaughter, which is growing more devastating each year. China, with its 1.3 billion people, must ban all domestic ivory trade as it threatens to push the African elephant to extinction. As long as the trade is promoted and endorsed by the government, the demand will grow. However, per CITES CoP16’s resolutions, China can simply make amendments to its current ineffective trade control system and claim they are complying and implementing their action plan. Thailand’s Prime Minister repeated claims made in the past pledging to end the domestic ivory trade, yet there is no timeline for this ban and the world’s elephants become increasingly endangered while policy change languishes.

Unbelievably, while actions to stop the poaching were all but absent, a proposed decision-making mechanism for a process on international trade in ivory, which outlines the criteria necessary to engage in future trade, was essentially unopposed. Discussing a potential legal trade in ivory only stimulates demand…and in the midst of a poaching crisis, CITES should be ashamed.

Though there were big missed opportunities, there were a few small steps forward for elephants. Most notably, Parties will be required to submit DNA samples from ivory seizures of more than 500kg to an appropriate facility for source analysis. This will significantly help combat the ivory trade if implemented correctly but it will take some time before the enforcement benefits are felt.

On one hand, CITES gave lip service to the need to reduce demand, while on the other, the Parties, encouraged by the CITES Secretariat continued to explore the development of a decision-making mechanism for trade in ivory – sending a very mixed message to the world. While it would have been best if the decision-making mechanism discussion had been removed from the table entirely, at least it has been deferred to 2016.

Read more on elephants at CITES from another EIA Wildlife Campaigner.

The massive surge in rhino poaching, the illegal trade in rhino horn and specter of a proposal for legal trade were hot topics at CoP16, and centered on Vietnam and South Africa.

Rhinos are being poached to feed a growing demand for horns for mythical medicinal purposes – and the demand is recognized by experts to be stemming from Vietnam. As noted by TRAFFIC, Vietnam is believed to be driving the complex and “rapacious illegal trade in rhino horn.”

EIA President Allan Thornton made an intervention during the Parties’ discussion of rhinos, calling for CITES to take serious action by imposing trade sanctions on Vietnam for undermining the effectiveness of CITES. EIA strongly urged the Standing Committee to support immediate enactment of trade suspensions with Vietnam and advocated for Parties to consider other trade sanctions against Vietnam until there is clear and strong evidence of a major and sustained crackdown on the rhino horn syndicates by Vietnam’s government. This call builds on the Pelly petition that EIA recently filed with the US government, requesting the US to take similar action on Vietnam for its illegal rhino horn trade, a summary of which can be found in our report, Vietnam’s Illegal Rhino Horn Trade: Undermining the Effectiveness of CITES.

There is concern that time is running short to close the growing market for rhino horn– particularly in Vietnam – and there is a need for decisive action. Vietnam’s CITES representatives acknowledged Vietnam’s role to some extent, but at the same time denied that Vietnamese nationals are driving the demand, stating repeatedly that rhino horn is not commonly nor widely used in the country. As long as Vietnam’s officials continue to deny Vietnam’s role, as long as the government fails to take a strong stance in reducing demand and enforcing legislation, Vietnam is not fulfilling its CITES obligations to protect rhinos. The world needs to see actions, not action plans. 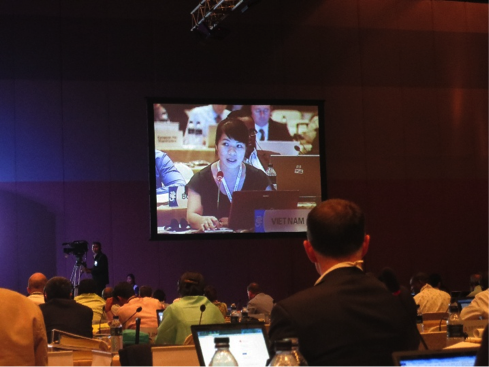 Vietnam’s CITES Management Authority’s International Cooperation Official Nguyen Thi Minh Thoung South Africa hosted several side events on rhinos, setting the stage for a proposal to legalize rhino horn trade, which is ludicrously argued as a “necessity” to save rhinos. While South Africa is home to the world’s largest population of rhinos, the effects of opening this trade is already being felt by rhino populations in Kenya and India, as demand increases and stimulates poaching. Along the same lines as a proposed ivory trade, a legal rhino horn trade directly conflicts with and undermines demand reduction strategies and serves as a means to launder illegally obtained products. To trade, South Africa would need to identify trading partners – and the countries they are eyeing are Vietnam and China. Such a strategy is destined to backfire – just as it did with South Africa’s success in re-establishing legal ivory trade with Japan and China.

By July 2014, when the CITES Standing Committee meets again, it’s likely that 35,000 more elephants will have been killed to make trinkets and more than 800 rhinos will have had their horns turned into false cures and status symbols for newly wealthy consumers in Vietnam and China.

The poaching crisis calls for more than CITES’ confused CoP16 approach – the global community needs clear stances for the illegal ivory and rhino horn trades that serve to actually protect the species. Solving the poaching crisis requires dedication and there is no quick fix – elephants and rhinos require collaboration, leadership, honesty and direct action. EIA will continue to build partnerships and fight for elephants and rhinos, and, among other things, push for a CITES response that addresses the reality and severity of the poaching crisis at the next Conference of the Parties in South Africa in 2016.

Near the end of CoP16, EIA, Freeland the Wildlife Protection Society of India held a press conference and issued a release explaining how CITES missed opportunities to help put a stop the poaching crisis for elephants, rhino and tigers.