Today marks the 10 years since the first World Rhino Day celebration on September 22, 2010. A lot has happened in the last decade. Back in 2010, conservationists were growing alarmed at what was then a new spike in rhino poaching. A total of 426 rhinos were reportedly poached in Africa that year, more than double the number poached the year before.

Over the next few years, rhino poaching rates would skyrocket as the existing systems put in place to prevent rhino poaching, regulate trophy hunting, and police rhino horn trafficking were exposed as woefully inadequate to prevent resourceful and ruthless organized criminal networks from trafficking poached rhino horn to consumers in Asia. In many cases, traffickers exploited private sector and government corruption in source, transit, and destination countries to ensure shipments of rhino horn would make the more than 6,000-mile journey from Africa to Asia undetected.

Poaching rates continued to climb for the next five years, reaching a peak of 1,349 African rhinos lost to poaching in 2015. More than 9,442 rhinos were poached in Africa over the past 10 years – equivalent to nearly 40 percent of the 23,700 rhinos remaining in Africa today (comprised of 18,067 white rhinos and 5,630 black rhinos).

Finally, in 2018 the number rhinos poached in Africa dipped below 1,000 for the first time in five years. South Africa, which is home to the vast majority of Africa’s rhinos, has reported declines in annual poaching figures every year since 2015. The black rhino population has increased slightly over the past few years, though poaching hindered greater potential population growth. These positive developments are encouraging and can be attributed in part to strengthened legislation and improved law enforcement in key rhino range and consumer countries. 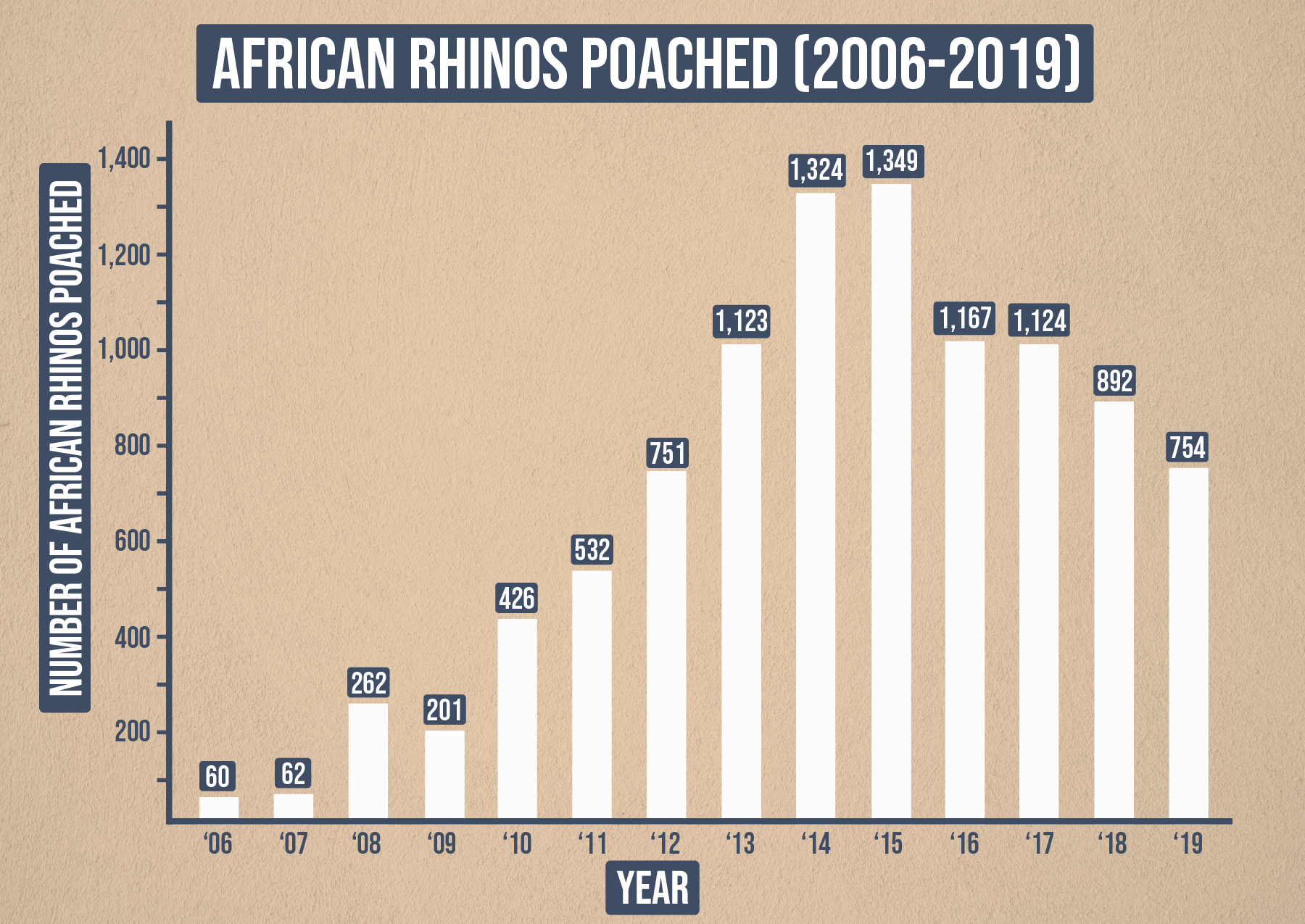 It would be a grave mistake, however, for governments to become complacent now. The rhino conservation landscape is complex and cannot be summed up by a cursory glance at annual poaching figures. Persistent consumer demand for rhino horn means that the poaching threat facing rhinos has not disappeared. Any letting off the gas now by the global rhino conservation community could see what progress has been made over the past 10 years disappear in an instant.

For one thing, declining rhino poaching numbers in South Africa must take into account the fundamental reality that there are fewer rhinos left for poachers to target after more than a decade of incessant poaching pressure. The white rhino population declined by 15 percent between 2012 and 2017 with much of this decline attributed to heavy losses in Kruger National Park, which saw its white rhino population plummet by more than 50 percent during this time period.

Secondly, rhino poaching is not declining uniformly across all rhino range states. Botswana is in the throes of a rhino poaching crisis unfolding in the Okavango Delta. Rhino poaching began to pick up in Botswana toward the end of 2018, and by 2019 Botswana’s 500-strong rhino population was under constant attack. At least 61 rhinos were killed by poachers between January 2019 and July 2020 in Botswana compared to between 0 and 2 rhinos poached each year from 2010 through 2017. The unrelenting poaching in Botswana has come with a severe human cost as well: at least 17 suspected poachers have been killed by Botswana’s anti-poaching forces this year alone.

In South Africa, where rhino conservation actions have outsize consequences for all rhino range states because of the country’s large rhino population, backwards policies and unforced errors threaten to undermine progress the country has made to protect its rhinos.

Despite international rhino horn trade having been banned since 1977 and consumer countries actively implementing initiatives to reduce consumer demand for rhino horn, South Africa maintains a legal domestic rhino horn market. Roughly half of South Africa’s white rhinos are owned by private citizens, and these private rhino owners have amassed several tonnes of rhino horn that can be legally sold on the domestic market provided that the proper government permits are secured.

There’s just one big rhino in the room: there has historically never been any significant demand for rhino horn in South Africa. Because of this, some private rhino owners have marketed their rhino horn to foreign nationals despite the risk that such sales could result in illegal rhino horn exports, and have even gone so far as to falsely advertise that commercial rhino horn exports are actually perfectly legal.

Recent rhino horn seizures demonstrate that South Africa’s legal domestic market is indeed contributing to the illegal rhino horn trade. In April 2019, 181 horns sourced from a private stockpile and destined for Southeast Asia were seized by the South African Police Service (SAPS). Two individuals were arrested for violating the terms of rhino horn transportation permits and for forging documents used in the botched trade deal. While the two men arrested could have faced up to five years in prison for their crimes, they instead received small fines totaling about $1,500 and $3,000, respectively.

This case is only one example of how South Africa’s domestic rhino horn market is contributing to illegal trade – there are others, and a spokesman for South Africa’s Department of Environment, Forestry and Fisheries recently confirmed that additional investigations into other cases are ongoing.

South Africa’s law enforcement apparatus is also starting to exhibit some concerning vulnerabilities of its own making. While South Africa has chronically struggled to convict ‘kingpins’ and other high-level rhino horn traffickers, they had achieved success in prosecuting of mid- and low-level rhino poachers and traffickers. Then in July of last year SAPS inexplicably terminated its partnership with RhODIS, the world’s most comprehensive rhino DNA database, without ever explaining why it relinquished one of its most effective tools in its toolbox to confront rhino poaching. The fissure between SAPS and RhODIS has resulted in a “major backlog” of rhino forensic samples awaiting to be processed that may lead to the acquittal of suspects currently standing trial for rhino-related crimes.

In a similar example of head-scratching decision-making, Mpumalanga Regional Court President Naomi Englebrecht attempted to permanently shut down the Skukuza Regional Court last August. Skukuza was established in 2017 specifically to expedite the prosecution of rhino poaching and horn trafficking cases and has been remarkably successful at meeting this goal. After a protracted legal battle over the future of the court, in April South Africa’s High Court ruled that Englebrecht’s closure directive was invalid and thus overturned. Despite the High Court ruling, Skukuza has yet to reopen. 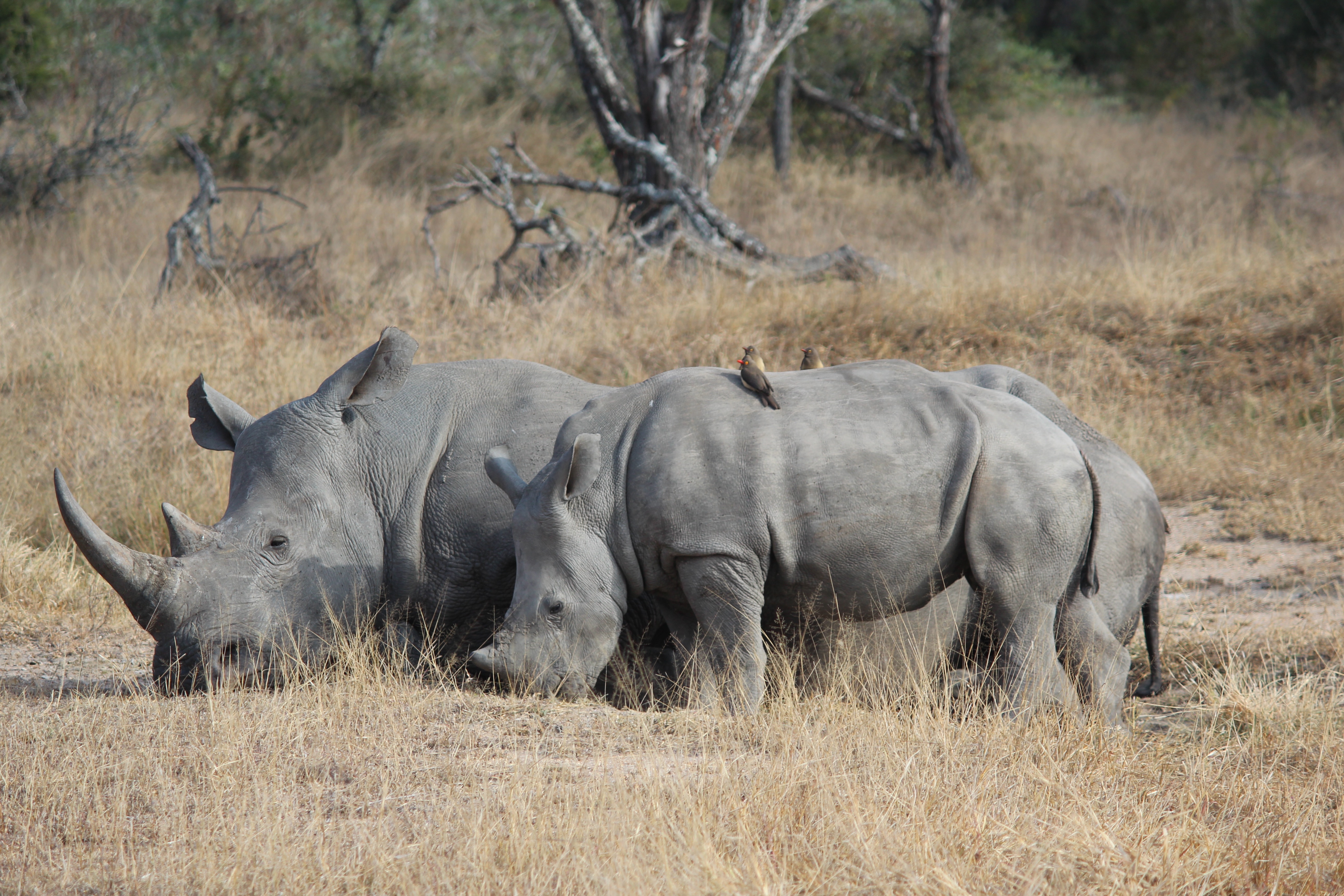 The past decade has been fraught with challenges for the world’s rhinos, yet some progress has been made. China in particular has stepped up enforcement and employed intelligence-led investigations that have resulted in significant disruptions to rhino horn trafficking networks operating within the country. Vietnam revised its Penal Code in 2018, which increased penalties for rhino horn trafficking. While a few recent convictions with strong penalties under the revised Penal Code for trafficking small-to-medium amounts of rhino horn is an encouraging sign, Vietnam still has significant progress to make toward dismantling the organized criminal networks controlling the trade in rhino horn and other wildlife products.

As the current poaching situation in Botswana demonstrates, things can change in an instant and progress that has been painstakingly achieved can be lost seemingly overnight. South Africa risks backsliding on the headway it has made to conserve its rhinos by propping up a legal domestic rhino horn market and by undermining its law enforcement capabilities through the abandonment of critical tools that have proven effective at countering rhino poaching and horn trafficking.

The COVID-19 pandemic has also added serious unexpected challenges to global rhino conservation efforts. While lockdowns and other similar emergency measures may have had the unexpected benefit of disrupting rhino poaching in some areas and affecting traffickers’ supply chains, this poaching reprieve seems to have been temporary and traffickers are nothing if not well-accustomed to adapting to unforeseen challenges. The loss of tourism dollars to government agencies and private reserves due to international travel restrictions will have severe consequences for rhino conservation as resources dry up.

If the next 10 years are to be better for rhinos than the past 10 years, we cannot afford to lose focus now. On World Rhino Day, EIA is calling for: