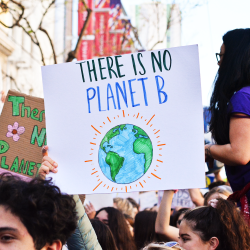 This year marks the 30th anniversary of the Montreal Protocol and a year since finalizing the Kigali Amendment, the landmark global agreement to phase down climate damaging hydrofluorocarbons (HFCs). It is not only a moment to celebrate and take stock of achievements, but also a critical period to prepare for successful implementation.

One area of vital concern is saftety standards that set design and installation requirements for using some climate friendly refrigerants that are flammable. A new EIA report unpacks the critical role that updated safety standards will play in implementation of the Kigali Amendment. Without sufficient external oversight, standards development work has often prioritized synthetic refrigerants at the exclusion of natural refrigerants, which risks biasing the market toward uptake of medium-GWP or transitional alternatives. In their current state, many standards severely restrict the use of hydrocarbons, which are among the most energy efficient low-global warming potential (GWP) refrigerants.

Several compliance deadlines are quickly approaching for countries to reduce HCFC and HFC consumption, including large reductions in 2020 for HCFCs and 2024 for HFCs. Updates to current standards must be published within the next few years in order to allow for greater uptake of hydrocarbons. This would make a major difference in enabling developing countries to leapfrog medium- and high-GWP HFCs in their HCFC phase-out plans and developed countries to meet their first phase-down commitments under the Kigali Amendment. 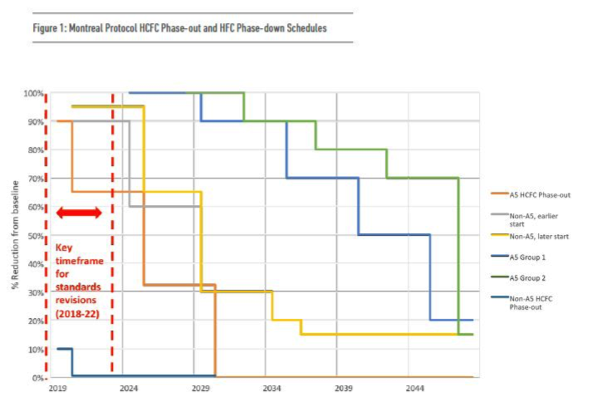 Progress in the Past Year

Standards received much deserved attention at the most recent Montreal Protocol meeting in Bangkok. They were the topic of a full day workshop and a report on standards that was produced by the Technology and Economic Assessment Panel (TEAP) raised a number of important issues, including the limited representation of developing country experts on international standards working groups and committees.

EIA’s report provides updates on the technical work of international standards bodies and those in different countries and regions such as the U.S., EU, China and India. International standards bodies made some progress issuing draft proposals, but it remains to be seen as to how quickly these working groups will reach consensus on technical revisions regarding flammability. In the U.S., earlier this year Underwriters Laboratories (UL) increased flammable charge sizes for domestic refrigerators and other equipment under UL 60335-2-24 to match that in the IEC standard, but UL standards continue to restrict the use of hydrocarbons in other commercial refrigeration and air conditioning appliances.

Additional efforts are needed both within the Montreal Protocol framework and in individual countries for standards that enable widespread safe application of low-GWP refrigerants. Within the Montreal Protocol framework, EIA calls for ongoing consultations between the Ozone Secretariat or TEAP task group and the key standards bodies accompanied by a regular reporting mechanism to inform countries and other stakeholders on progress and challenges. Financial resources and technical capacity building will also be needed for A5 countries to undertake enabling activities coordinated by ozone offices with national standards bodies and technical experts.