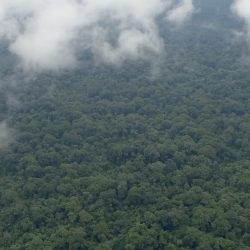 China is the world’s largest timber importer. Timber processed in China originates in some of the world’s most fragile and threatened forest ecosystems, including Latin America, the Congo Basin in Africa, and Southeast Asia. Despite recent increases in the relative percent of timber sourced from low risk countries, the immense scale of China’s sourcing from high risk regions means that a significant proportion of its timber and wood product imports were illegally harvested. Chinese companies, from large State-owned enterprises (SOEs) to private businesses of all sizes, are increasingly active in the forest products trade within producer countries around the world. 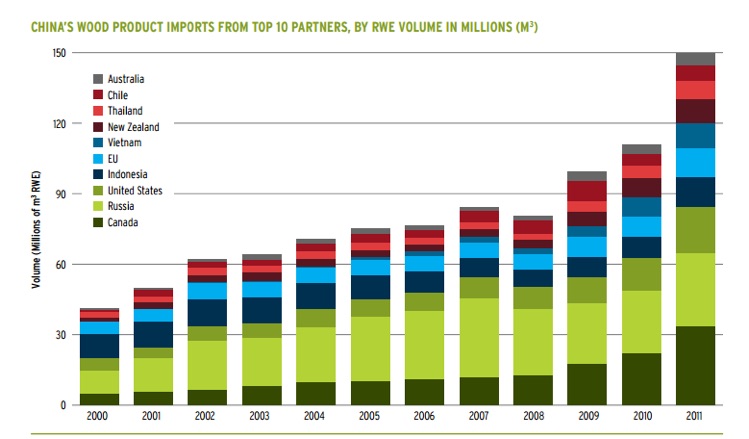 EIA’s investigations in timber producing, processing, and consuming countries around the world have revealed China’s growing role as the largest driver of illegal logging and deforestation worldwide. China’s demand for illegal timber is feeding the destruction and degradation of critical forest ecosystems, with severe consequences for forest communities, wildlife, and for the long term sustainability of China’s own wood products manufacturing industry.

Chinese demand for high-risk timber initially arose due to its role as a manufacturer of wood products for export to wealthy markets such as the U.S., Europe, and Japan. Over the past 30 years, China has become the leading global manufacturer of most major categories of wood products, including plywood, flooring, and furniture. China is the world’s largest importer of precious “redwood” timber for its domestic luxury antique-style furniture market.

Demand from end markets in developed countries, and increasingly from Chinese consumers themselves, drives imports of illegal timber, with price imperatives from buyers and steep competition among manufacturers combining to incentivize cutting corners, including by sourcing cheaper, illegally sourced timber. A slowdown in consumer demand from the U.S. and Europe following the global recession in 2008 was more than balanced out by new construction in China. China is now the world’s largest consumer of wood products.

China must enact a prohibition on illegal timber imports, accompanied with enforceable due diligence requirements on all importing companies. The Chinese government must implement policies on par with those already passed by other major markets, such as the United States, European Union, and Australia. The time has come for China to accept the responsibility associated with its market leading status, and take similar measures to ensure the proper conduct of Chinese companies at home and abroad.

The weaknesses of China’s voluntary approach

While the government has failed to enact a binding prohibition on illegal timber imports, the Chinese government has nonetheless acknowledged responsibility for importing illegal wood products and taken a number of early steps to create an effective policy response. Since 2007, China’s State Forestry Administration (SFA) has drafted a series of voluntary guidelines for Chinese actors in the overseas timber trade. However, voluntary measures, absent any penalties or enforcement requirements, have proven ineffective in preventing imports of illegal timber. Since the measures were enacted, EIA investigations show that illegal timber is still entering the Chinese market at a rapid rate.