The United States has joined Syria and Nicaragua as the only countries in the world not party to the Paris climate agreement. Pulling out of this agreement is a significant step backwards in the fight against climate change, stalling growth and development. Below is a personal account from an expeditioner who saw the urgency of addressing climate change firsthand.

The phone was ringing. The sun was brightly pouring into our hotel room. It shouldn’t be this bright outside at 5am, I thought. In less than one second, I realized we’d overslept and the unholy phone must be our expedition team wondering where we were. It was 7am and all the buses to the airport would have left by 6:30. Welp. There goes $12,000 spent on a climate expedition that will never happen. But by some miracle combination of adrenaline, luck, and unseen forces, my roommate and I made it downstairs to the last remaining bus within five minutes. We were on our way to Antarctica.

In October 2016, I applied to the International Antarctic Expedition, a program hosted by polar explorer Robert Swan, for individuals seeking to learn about the history, wildlife, and conservation of Antarctica, and how the continent is being affected by a changing climate. I was drawn to this most inhospitable place to see how anthropogenic climate change is impacting our planet in a place where human activity is at a minimum. I wanted to be able to play a more active role in climate change conversations and bring firsthand account to the discussion. So I embarked on this journey in March with 80 other participants from 32 countries, from Japan to Qatar, Argentina to Holland. The other participants were some of the most remarkable and impressive go-getters I’ve ever met, and their passion to learn about climate change added to the story I was looking to tell.

Climate change is not a problem distributed evenly across our planet. While the forests of Peru see record shattering rainfall, the already-arid regions of Kuwait are experiencing prolonged drought. This is also true in Antarctica. The Antarctic Peninsula is warming at a rate roughly six times faster than the rest of the planet. In the last few decades the temperature has increased 4-5 degrees in some places. However, in East Antarctica, on the other side of the continent, temperatures are maintained at their frigid and freezing norms. What helps to keep in mind when conceptualizing this idea, is that Antarctica is massive, more than 1.5 times larger than the continental United States.

Thirty years ago, the global community found that manmade gases known as CFCs were creating a hole in the ozone layer over Antarctica. All countries of the world came together under an international treaty called the Montreal Protocol to phase out these ozone depleting substances. Decades later, upon successful phase-out of these gases, scientists have found that the ozone layer is healing itself, repairing the once dangerous hole that threatened human and environmental health. However, in phasing out CFCs, humans created new gases, HFCs, which do not deplete the ozone layer, but are hundreds to thousands of times more damaging to the climate than carbon dioxide. The gases are used in most refrigeration and air conditioning systems. The organization I work for, the Environmental Investigation Agency, has been at the forefront of this issue for over a decade, calling for an urgent phase down of HFCs. Finally, after years of negotiations, the global community agreed to a phase down of these potent greenhouse gases in October 2016, again under the Montreal Protocol.

While in Antarctica, I told my fellow participants about the Montreal Protocol and how promising it was for the entire world to have agreed to this need to mitigate climate change. We spent the duration of our expedition on the Antarctic Peninsula, where the effects of global warming are most apparent. Temperatures ranged from the 20s-30s Fahrenheit, and most days were accompanied by a shining sun and calm seas. According to the glaciologist on board, parts of Antarctica saw record high temperatures this year, some of which were during our expedition, which would explain why I stripped down to my base layer on some days.

Given the significant warming that the Peninsula has been facing, some of its wildlife are being affected. Following my expedition, I made a short film about one of those animals that serves as an indicator of the changing climate, the Adelie penguin, which is restricted to Antarctica in its range. It feeds on krill, tiny shrimp-like creatures that are at the base of the food web in Antarctica. The krill feed on an algae called phytoplankton that grows on the underside of sea ice. Since 1979, annual sea ice extent along the western side of the Antarctic Peninsula, which is prime Adelie penguin habitat, has decreased by 40 percent. Less sea ice means less food for the krill and less food for the penguin. So Adelie penguins are being pushed further south, seeking places where sea ice cover has not yet been affected by warming temperatures and shorter winters.

While my tardiness on the morning of our expedition departure is a funny way to begin my story, the frantic scrambling, the urgency and panic I felt in those first few minutes of being awake are analogous of how I feel toward climate change. To me, climate change is the biggest threat facing our planet today, connecting issues of national security, human health, economic development, and environmental justice. This is the fight of the 21st Century. Will we wake up in time to protect our world as we know it, or will we bury our heads under the covers and keep sleeping? 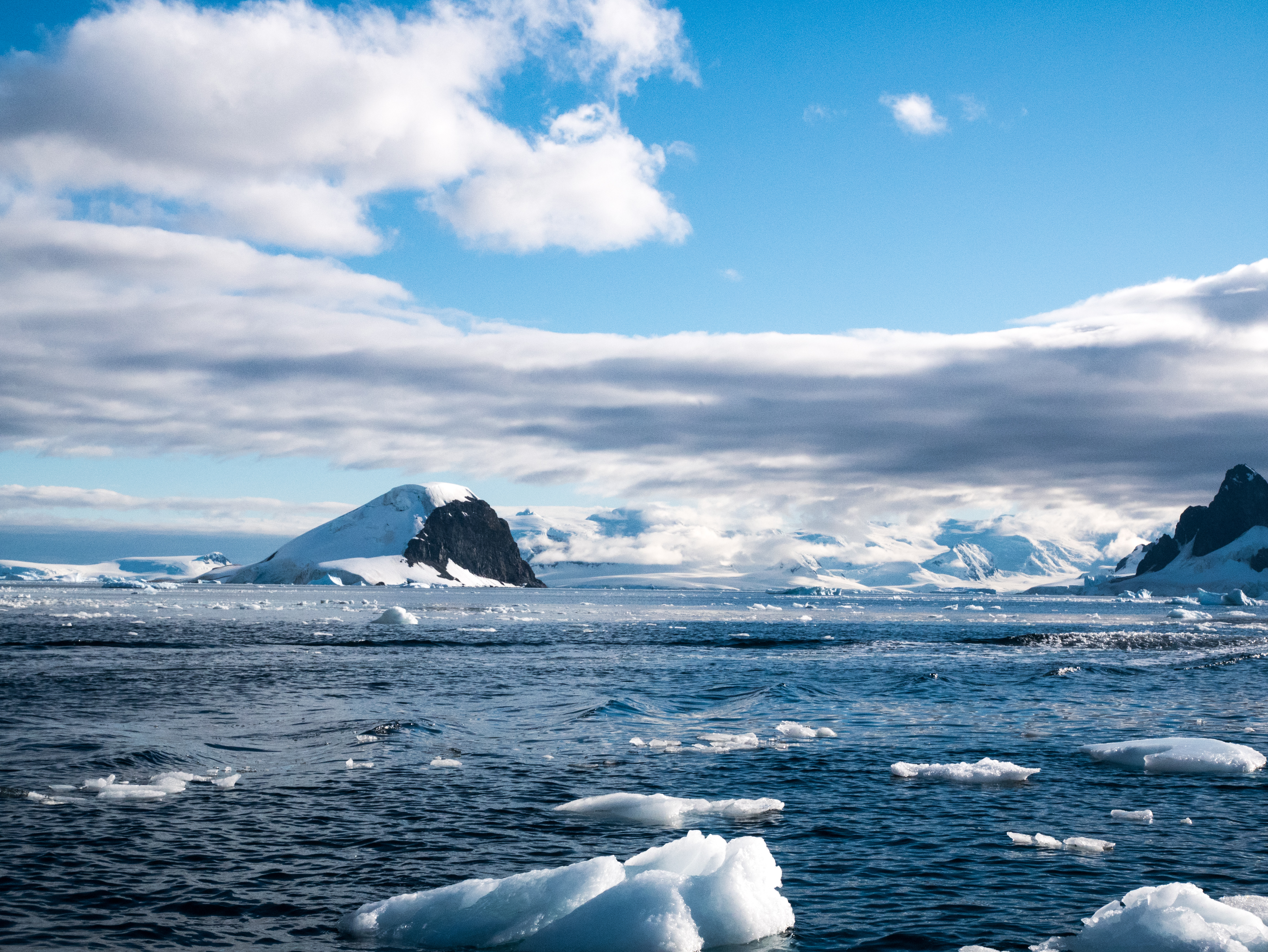 The Antarctic Peninsula is warming at a rate six times faster than the global average. Photo by Maggie Dewane