News broke recently in the Jakarta Post that two Peruvian oil palm plantations located in Peru’s Amazon region of Ucayali, Plantaciones de Pucallpa and Plantaciones de Ucayali, plan to sell land they control in the Peruvian Amazon through a trust services company, La Fiduciaria S.A., despite ongoing prosecutions against these companies for illegal deforestation. The Peruvian Ministry of Agriculture has confirmed that these companies removed at least 9,174 hectares of natural forest without authorization as part of their oil palm plantation development. 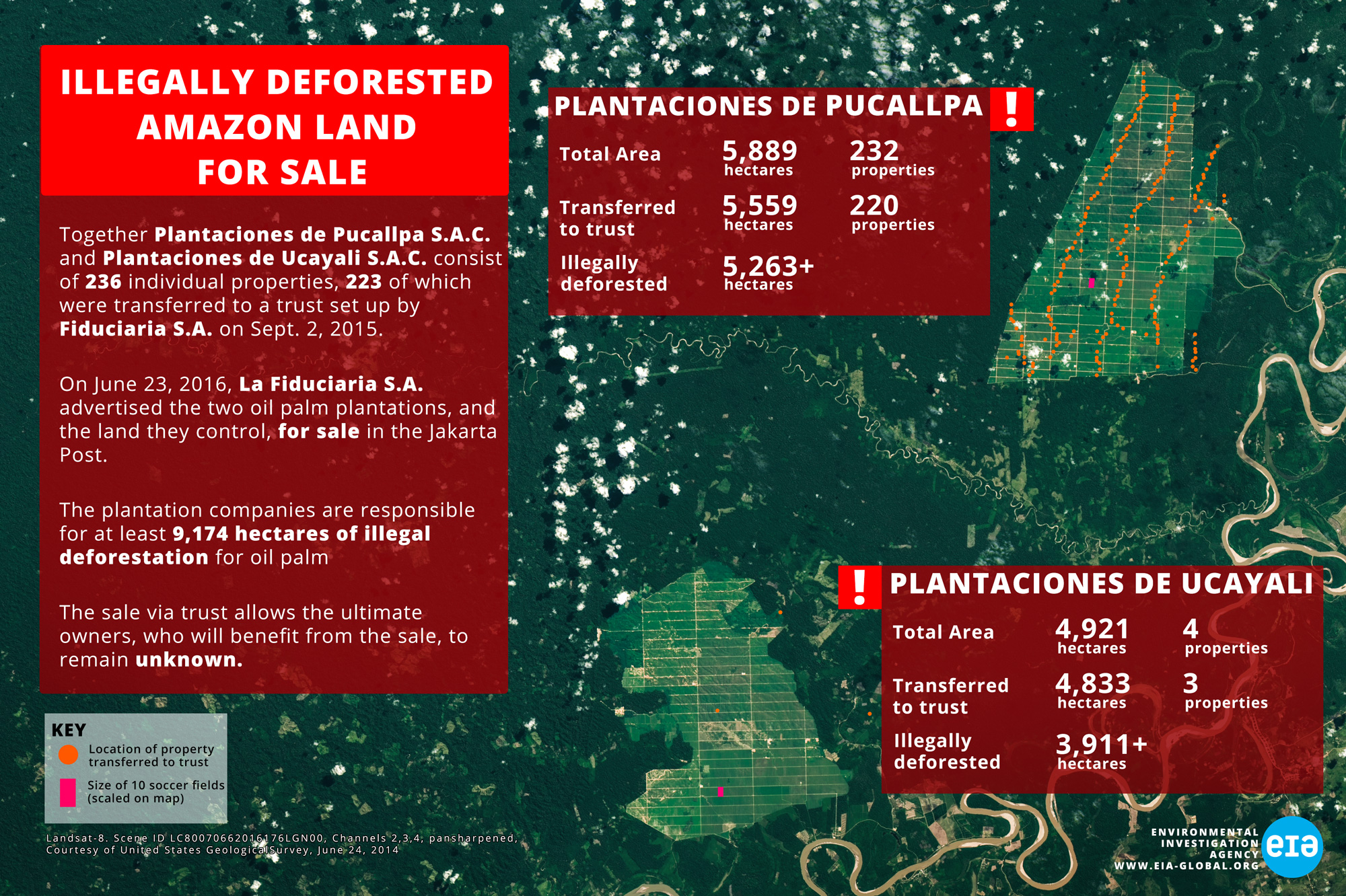 (EIA-produced map depicting scale, location, and corporate connections of the clear-cut Amazon land now being auctioned by La Fiduciara S.A. For the high resolution image, please click here.)
In response to these findings of unauthorized deforestation and other negative environmental impacts, Peru’s Ministry of Agriculture issued stop orders against any further activity by Plantaciones de Ucayali and Plantaciones de Pucallpa, in 2014 and 2015 respectively. On the same day that the 2015 stop order was issued to Plantaciones de Pucallpa, the properties on which both companies had installed oil palm plantations were transferred to a trust managed by La Fiduciaria S.A.

The potential sanctions against the companies could add up to millions of dollars in fines for the illegal deforestation of the same pieces of land that the companies now are attempting to sell.

In a related case, Peruvian company Cacao del Peru Norte has been found responsible for the illegal deforestation of over 1,944 hectares of mostly primary forest in Tamshiyacu, Iquitos, and is also under governmental sanctions and judicial investigations. This company is owned by the Cayman Islands-based United Cacao Limited, which has financed the Ucayali plantations now for sale and whose CEO acts as a legal representative for Plantaciones de Pucallpa and Plantaciones de Ucayali: Dennis Melka.

The June 2015 sale announcement lists the offshore company “SH UOL Administrative Agent Limited,” based in Bermuda, as the beneficiary of the trust, but records are not available regarding who really owns this company. If this sale is structured specifically to evade Peruvian law or sanctions, the sale would be considered illegal, according to Peruvian environmental lawyer, Cesar Ipenza. However, even in absence of outright illegality, the trust structure allows anonymity, both of the true current owners of the properties and those who might be acquiring them.

On its website, Peruvian firm La Fiduciaria S.A. lays out a number of other reasons for transacting business through a trust, including tax benefits and the ability to make agreements without Peruvian judicial approvals. 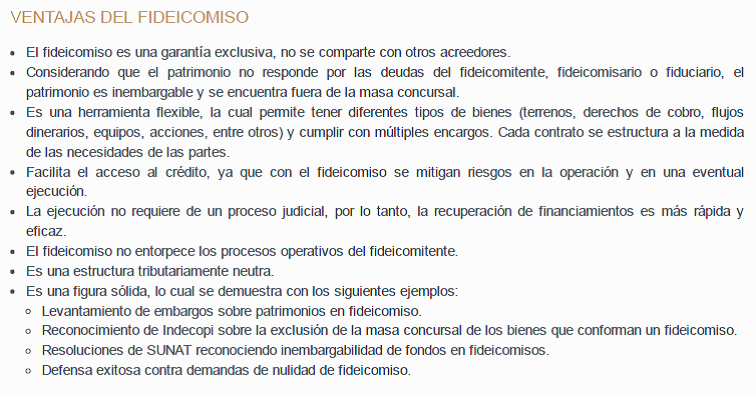 (Screenshot of La Fiduciaria S.A. as on June 29, 2016)
Peruvian lawyers representing La Fiduciaria S.A., which is orchestrating the sale of these plantations, have set up a trust through which to make the sales, allowing the ultimate sellers and buyers of the land to remain anonymous to the public. Statements in the Jakarta Post sale advertisement which claim that the sale is occurring through a public auction are deceptive—the location and conditions of the sale have not been disclosed and are not available to the public.

Together Plantaciones de Pucallpa S.A.C. and Plantaciones de Ucayali S.A.C. consist of 236 individual properties totaling 10,810 hectares. On Sept. 2, 2015, 223 of these properties were transferred to the trust set up by Fiduciaria S.A.

Information about the illegal deforestation and ongoing legal cases has been widely available across Peru, and internationally. Shedding light on the corporate model that was first used by companies related to Dennis Melka in the traditional center of industrial palm oil production, South East Asia, helps explain the market for deforested palm plantations.

Dennis Melka, the legal representative of a 25-company network in Peru, which includes the Ucayali plantations for sale, operated Asian Plantations Ltd. and several of its land-holding subsidiaries in Sarawak, Malaysia’s largest state. Over the course of a few years starting in 2007, Asian Plantations Ltd. and its subsidiaries accumulated a vast amount of land at a low price and proceeded to clear cut intact tropical forest for oil palm plantations.

To finance this buying spree and the resulting destruction of thousands of hectares of Malaysian forest, a complex network of logging and oil palm companies contributed profits from politically-linked logging companies.3 Under Dennis Melka’s management, Asian Plantations Ltd. was listed on the London Stock Exchange’s Alternative Investment Market (AIM), declaring a much higher valuation of the land to investors than was originally paid for the 99 year forest concessions from the Sarawak government.

In late 2014, the Singapore-based Asian Plantations Ltd., and its subsidiary plantation operators in Malaysia, was sold to one of the world’s largest plantation operators, Felda Global Ventures (FGV). FGV is listed on the Malaysian stock exchange and is a member of the Roundtable on Sustainable Palm Oil (RSPO). The vast forest destruction committed by Asian Plantations Ltd.’s subsidiaries, and the related reputational consequences or supply chain risk which FGV subsequently took on, has received little if any attention from FGV’s shareholders and the RSPO. Asian Plantations Ltd., also a member of the RSPO since 2009, had not filed any reports on progress toward compliance with the voluntary RSPO principles by the time of its sale. The company ceased to trade on AIM after its plantation was acquired by Felda Global Ventures.

In early 2015, Felda Global Ventures commissioned High Conservation Value assessments of the Sarawak plantation land acquired via Asian Plantations Ltd., which is part of the New Planting Procedure required of RSPO members. On-site environmental inspections reported that the land previously operated by Asian Plantations Ltd. no longer contained any of the abundant forest which had been present just a few years before, according to satellite imagery. Rather than a healthy forest ecosystem, the company land contained sporadic indicators of high conservation value of these lands, including endangered species, important local water sources, and local cultural heritage sites.4 The massive plantations had displaced any further evidence of the forest which previously stood. In 2016, Felda Global Ventures announced it was withdrawing its mills from the RSPO, including the mill it acquired from Asian Plantations Ltd., citing sustainability concerns in its supply chain.

By that time, Dennis Melka had moved on to the Amazon, and companies under his control were already destroying thousands of hectares of Peruvian rainforest.5 The current, opaque sale of the two oil palm plantations in the Peruvian province of Ucayali, and the existence of other Melka-controlled corporate entities waiting in the wings in Peru and in offshore jurisdictions, portends the repetition of the Malaysia model of deforestation and creation of palm oil plantations across Peru.

Globally, many large scale palm oil buyers and traders have committed to deforestation-free supply chains, but the role of smaller, legally distinct corporate actors with non-transparent ownership and funding supplies who clear carbon-rich tropical forests, create palm oil plantations, and then sell them to the larger palm oil producers has not been adequately scrutinized. If the trend represented by these cases in Peru and Malaysia continues, it could allow these relatively small firms to essentially provide “deforestation services” in advance of acquisitions by owners with public-facing brands, stocks, and reputations to maintain. Without transparency about true corporate ownership and financial flows, and long-term accountability for deforestation, there is no credible way for companies to prove adherence to the recent wave of socially and environmentally friendly policies and deforestation-free pledges.