Known for their white skin, distinctive “melon” foreheads, and high-pitched vocalizations, beluga whales are one of only three cetaceans (whales, dolphins, and porpoises) that reside within the Arctic. Belugas are well adapted to their harsh environment with a thicker than normal blubber layer that provides added protection against the frigid Arctic waters. With no presence of a dorsal fin, they can swim forwards or even backwards under the sea ice as they dive for Arctic cod, salmon, and other prey.

Today there are more than 150,000 belugas living in the wild, and they are imperiled by the increased industrialization of the largely pristine Arctic marine ecosystem. Man-made climate change is causing the Arctic to warm at twice the global rate, and it is reducing critical annual sea ice coverage which serves as the cornerstone for the region’s ecology and marine food web. Climate scientists estimate that by 2050 the Arctic will likely become ice free during the summer months which will lead to large-scale commercial shipping through Russia’s Northern Sea Route, and eventually through the fabled Northwest Passage. EIA recognizes that this increased ship traffic will drastically increase underwater noise within Arctic waters, impairing the ability of belugas and other vulnerable marine mammal species to effectively communicate, reproduce, and locate prey through sound. Continued exploration for oil and natural gas will also increase the likelihood of a catastrophic oil spill in the Arctic, which is particularly devastating due to very little spill response and cleanup infrastructure and capability.

As apex predators, belugas are also highly vulnerable to pollution within the marine environment which can compromise immunity and contribute to a reduction in body condition and reproductive fitness. Exposure to pollutants can also lead to contamination of beluga whale prey, further impacting overall health status.

One particular example of the critical need for increased protections of beluga whales is the highly endangered Cook Inlet population, located in southeast Alaska near the port city of Anchorage. This geographically and genetically distinct population only consists of about 279 individuals and at their current rate of decline (approx. 2.3% annually since 2008), the population faces a serious risk of functional extinction in about a decade. The major threats preventing the recovery of this imperiled population are cumulative stressors, including:

The US Federal Government, through the National Marine Fisheries Service (NMFS) – the agency charged with the management of Cook Inlet belugas, published a detailed population Recovery Plan (RP) in 2016. The RP identified and ranked ten potential threats to recovery and developed over 60 specific recovery actions aimed at reducing these threats. Since the publication of the plan, the decline of the population has only accelerated and the window of time to make meaningful interventions to save Cook Inlet belugas is closing. EIA is urging NMFS to re-examine its management approach to make dramatic changes to every aspect of its recovery plan, from permitting and pollution testing and stranding response to understanding the role of prey availability and climate change to the population.

Narwhals, similar to belugas, reside within Arctic waters and are highly dependent on robust annual sea ice presence. They are considered at high risk from the impacts of climate change due to their more restricted habitat range and narrow prey preference. Increasing human activities like commercial shipping or oil and natural gas explorations in the Arctic generally, and in Baffin Bay especially, are also a risk to narwhals. Growing threats such as noise, potential oil spills, and marine debris could jeopardize this species’ overall health and survival. 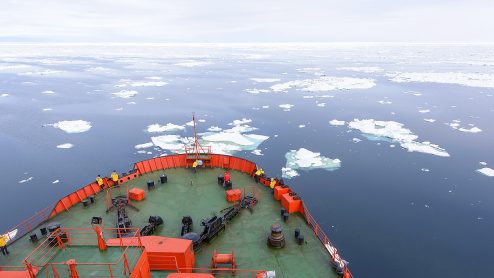 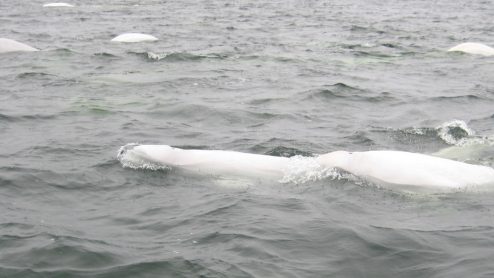 Learn more about this endangered population

Cook Inlet beluga whales (CIBWs) are in peril. Only about 279 individuals remain and at their current rate of decline the population faces a serious risk of functional extinction in about a decade. Cook Inlet belugas have been in decline for almost two decades and were designated as endangered in 2008. While the situation is […]

Washington, DC – Today the U.S. Army Corps of Engineers denied Northern Dynasty Mineral’s Clean Water Act 404 permit for the Pebble Mine, a massive gold and copper mine proposed for the headwaters of Bristol Bay Alaska. EIA’s Wildlife Team Lead and Counsel, Danielle Grabiel, said: “The Army Corps made the right decision today for […]

Washington D.C. —The Environmental Investigation Agency (EIA) today released two tapes that feature Canadian mining baron, Ron Thiessen, discussing his political strategy for securing a federal permit for the controversial Pebble Mine project in southwest Alaska. The recordings underscore both Thiessen’s importance as a driving force behind the Pebble project and the financial windfall that […]

Watch above or directly on Youtube!Premiere starts at 4pm Alaska / 8pm Eastern! What the film is about: Featuring music by Portugal. The Man and narrated by Zach Carothers, White Whale, Gold Mine shines a light on the importance of beluga whales to Alaskans and the Alaskan ecosystem. The film will highlight how belugas, other […]

The Pebble Tapes are a series of recorded conversations between EIA investigators and the Chief Executive Officers of Pebble Limited Partnership and Northern Dynasty Minerals, the companies behind the contested Pebble Mine project in Alaska. The the tapes are organized by topic and edited for brevity within each topic. Where the investigators’ voices can be […]