Kigali, Rwanda – Parties to the Montreal Protocol are expected to adopt an historic global agreement mandating controls on hydrofluorocarbon (HFC) consumption and production after eight years of protracted negotiations.

The agreement, expected to be approved within hours, will avoid more than 70 billion tonnes of CO2-equivalent HFC emissions.

The Kigali amendment will cap and phase down HFC consumption starting 2019, with developed countries taking action first and developing countries beginning the phase down in 2024.

Most developing countries, including China – by far the largest HFC consumer and producer – have committed to freeze HFC consumption in 2024. A second, later schedule was agreed for a small number of countries including India, Kuwait, Pakistan, and Saudi Arabia.

“Compromises had to be made, but 85% of developing countries have committed to the early schedule starting 2024, which is a very significant achievement,” Clare Perry, EIA UK Climate Campaign Leader. “According to our initial calculations, this deal will avoid more than 70 billion tonnes of CO2 equivalent emissions by 2050 – which will be close to avoiding a half a degree of warming.”

Alexander von Bismarck, EIA US Executive Director said, “The Kigali Amendment, with the Paris Agreement, gives 2016 the biggest one-two punch in the history of battling global warming. Still, with billions of tonnes of emissions left untouched, the ultimate power of the Kigali amendment now depends on accelerating the removal of these industrial climate-killers in upcoming meetings.”

• HFCs are super polluting greenhouse gases thousands of times more damaging to the climate than CO2, used as substitutes for ozone-depleting substances in refrigeration, air-conditioning and foams. They are fastest growing group of greenhouse gases.

• The Environmental Investigation Agency (EIA) has been calling for a phase-down amendment under the Montreal Protocol since 2007.

• In 2009, the Federated States of Micronesia and Mauritius were the first countries to propose an amendment under the Montreal Protocol to phase down HFCs.

• Further details in Averting Climate Catastrophe: Our Obligation to Adopt an Ambitious Kigali HFC Amendment to the Montreal Protocol 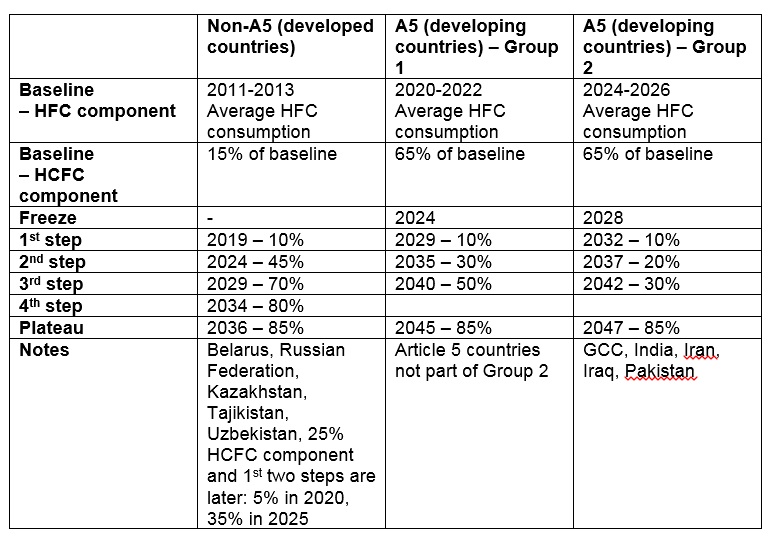 Standards – Parties are expected to work towards ensuring global industry standards to enable the safe introduction of low-GWP alternatives to HFCs.

Energy Efficiency – Parties are expected to agree to a way forward to maximize energy efficiency in the transition out of HFCs.

Technology review – To be completed first in 2022 and every five years after. Additional technology review 4-5 years before 2028 to consider the compliance deferral of two years from the freeze of 2028 in A5 Group 2 to address growth in relevant sectors above certain threshold.