From November 27th through December 1st, the CITES Standing Committee will convene for its 69th meeting in Geneva, Switzerland. One of the many issues set to be discussed is the implementation of the landmark CITES decision to ban domestic ivory markets. In 2016 at CITES CoP17, Parties unanimously approved amendments to Resolution Conf.10.10 (Rev. CoP17), “Trade in elephant specimens,” that included recommending urgently closing domestic ivory markets that contribute to poaching or illegal trade. Japan has historically been one of the largest ivory markets in the world and maintains that it is exempt from the recently agreed upon changes to Res. Conf. 10.10. Dr. Peter H. Sand, former CITES Secretary-General (1978-1981), has produced a legal assessment of Resolution Conf. 10.10 and its implications for Japan’s domestic ivory market that finds Japan’s ivory market does in fact contribute to poaching and illegal trade and thus is not exempt from the 2016 ban on domestic elephant ivory markets.

Read EIA’s recommendations to the Standing Committee with regard to Resolution Conf. 10.10 and Japan’s ivory trade 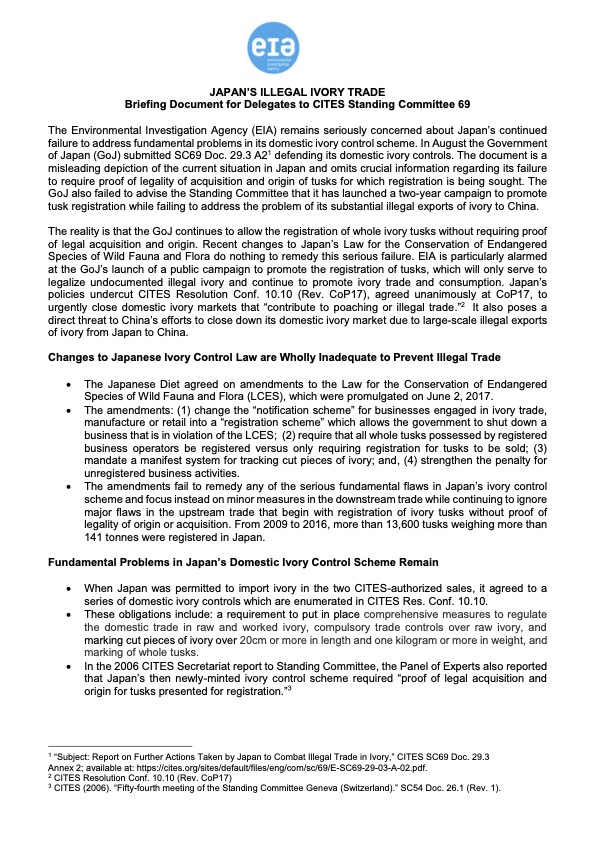