Eastern Europe’s Carpathian Mountains may seem remote for most Japanese, but lumber stolen from these ancient forests permeates Japan’s housebuilding sector. New reports from Romania and Ukraine reveal the extent of illegal logging, corruption, and bribery practiced by some of Europe’s largest wood processors. At risk are the continent’s largest populations of bears, wolves and lynx, as well as the livelihoods of forest communities across the region. Much of this illegally-cut timber is purchased by Japan’s largest trading companies and distributed all across Japan. Under Japan’s new Clean Wood Act (CWA), participating Japanese importers must take measures to “ensure the use of legally harvested wood.”

Many Japanese trading companies have developed corporate due diligence policies to comply with the CWA as well as their own internal Corporate Social Responsibility (CSR) policies. Despite their knowledge of the serious implications of illegal sourcing in Eastern Europe for at least two years, major Japanese importers continue to import high-risk timber from the region. Japan’s imports are fueling ongoing illegal logging and corruption, and preventing meaningful reforms from taking hold. 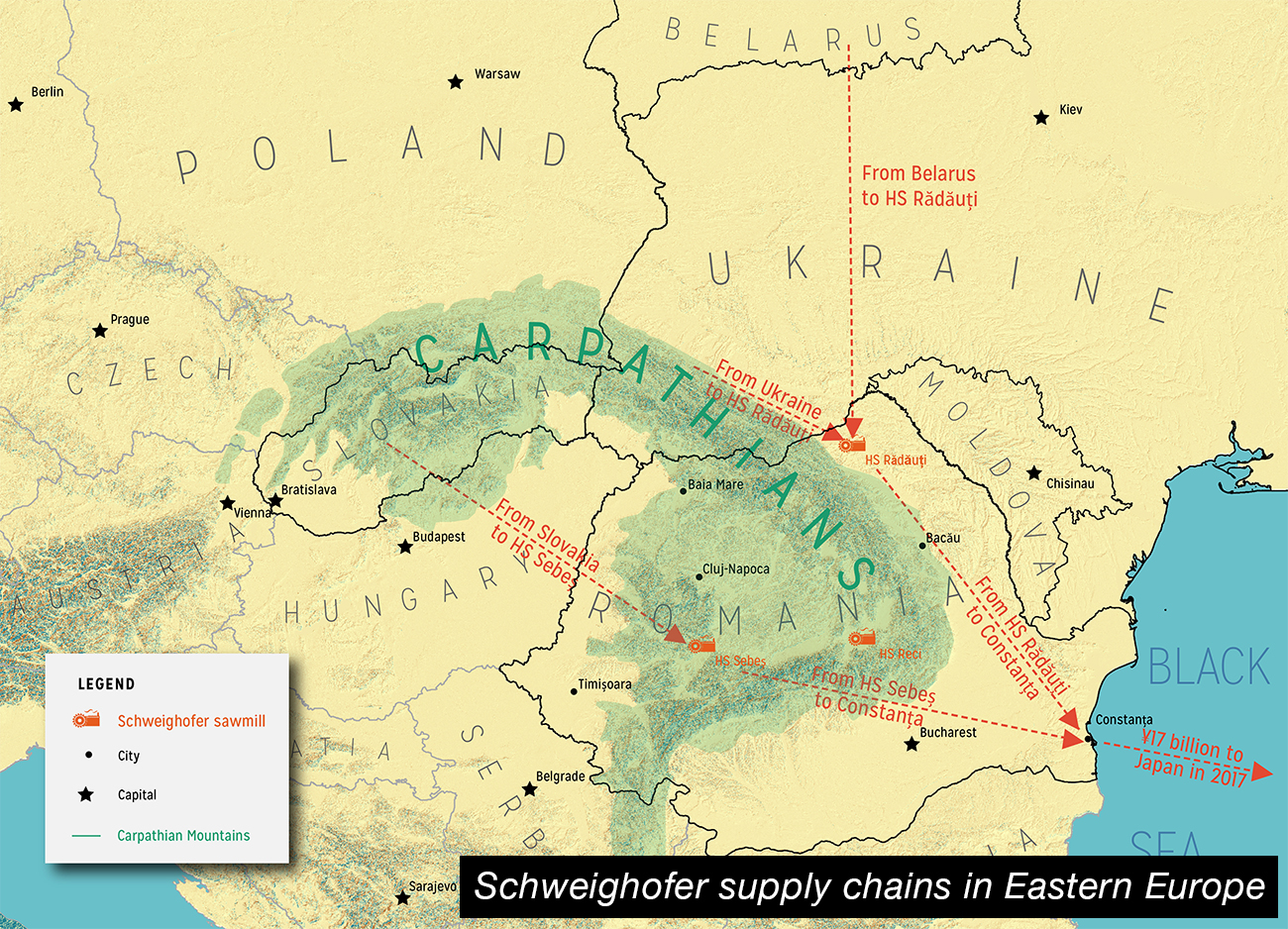 Japanese importers have been aware of the high risk of illegal logging in Romania and Ukraine for years. In 2016 EIA published a report entitled “Built on Lies: New homes in Japan destroy old forests in Europe,” detailing the extensive scale of illegal logging practiced by Romanian suppliers of Holzindustrie Schweighofer (Schweighofer), an Austrian company which is the second-largest sawmiller in Europe. EIA’s investigation found that Schweighofer sourced its Romanian logs from over 1,000 individual suppliers, and that in many cases these suppliers were harvesting trees illegally, cutting trees in national parks and other protected areas, and on land stolen from local communities. EIA’s report followed years of media coverage in Romania and across the region on Schweighofer’s illegal timber sourcing. EIA’s investigation found that 50% of Schweighofer’s exports went to Japan, comprising lumber and laminated beams imported by Japan’s largest trading companies (see Table 1).

EIA presented this report to Schweighofer’s largest Japanese buyers in 2016. In February 2017, the Forest Stewardship Council (FSC) disassociated from Schweighofer, following a detailed FSC expert panel report that found “clear and convincing evidence” of illegal timber sourcing by the company. However, the Programme for the Endorsement of Forest Certification (PEFC) has maintained its certification of Schweighofer, despite multiple complaints. The PEFC’s lack of effective enforcement mechanisms and failure to act in the face of overwhelming evidence of violations of its policies exposes this certification system as hollow and meaningless.

In May 2018, Romanian police raided Schweighofer facilities and suppliers as part of a years-long investigation into the company for illegal logging, tax evasion, and links to organized crime. The government puts the financial damage to the State at 25 million euro. The raid confirmed that an investigation by Romania’s anti-mafia authorities into Schweighofer, started in 2015, remains ongoing. 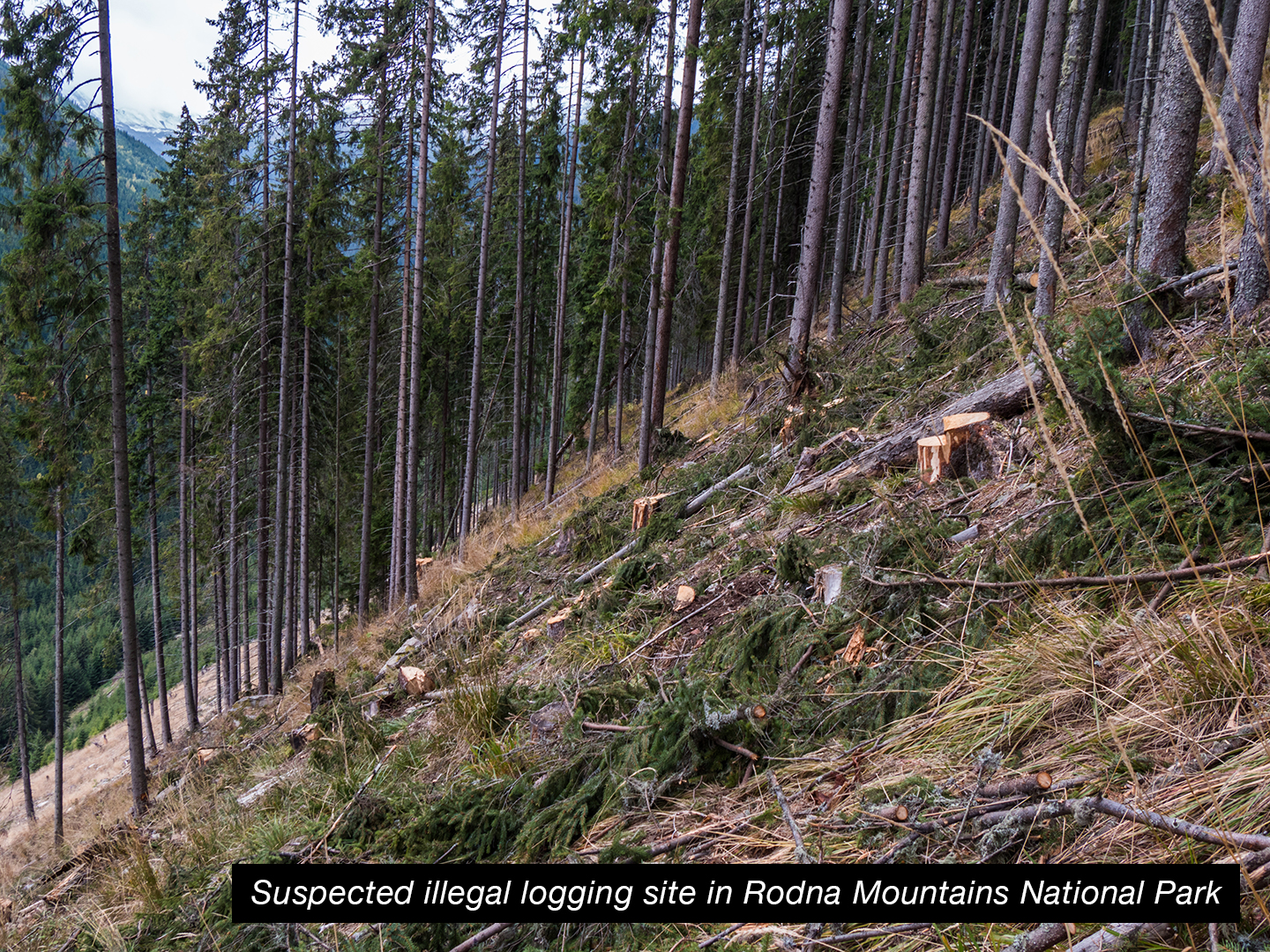 Schweighofer still buys nearly half of its Romanian logs from third-party log yards – independent suppliers that buy logs from multiple other companies. For this wood, Schweighofer lacks traceability back to the forest origin and is unable to exclude timber from unwanted sources, or from national parks and other protected areas. Although Romanian law allows limited cutting in national parks, EIA’s field investigation found instances of illegal and environmentally destructive logging in two national parks. 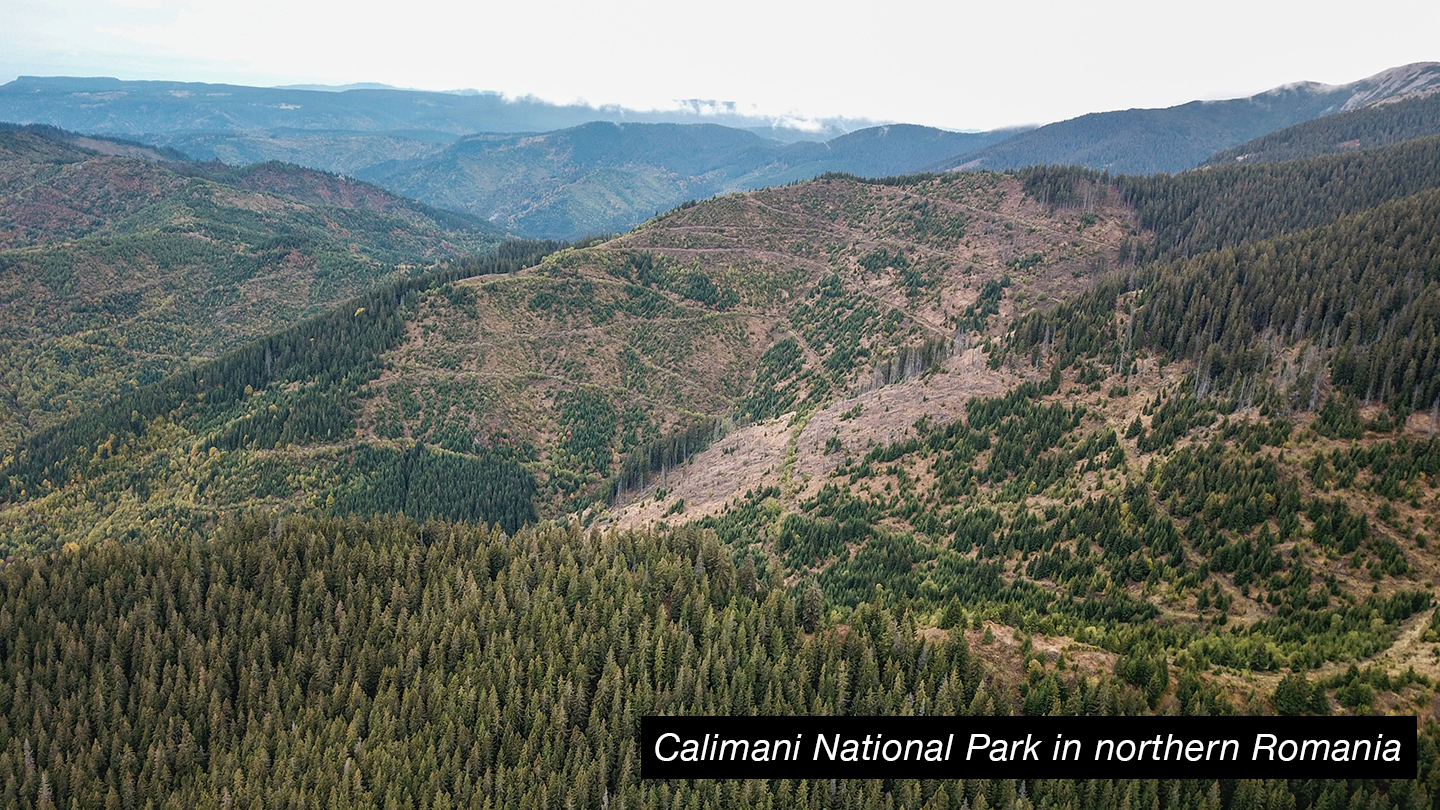 EIA’s recent investigation found that Schweighofer’s log suppliers have transported over 35,000 m3 of timber from these two national parks in the 18 months from January 2017 to June 2018. One of Schweighofer’s largest Romanian suppliers of wood is called Frasinul. Frasinul cuts wood in numerous sites in national parks and operates numerous log yards nearby, from which it sells logs to Schweighofer. Frasinul has a history of legal troubles; its CEO has been under investigation by Romania’s anti-corruption authorities since 2014.

Also in July 2018, the London-based NGO Earthsight released a comprehensive report detailing large-scale illegal logging and corruption in Ukraine’s forest sector, linked to Schweighofer and other large European companies. Ukrainian and Romanian customs data indicate that Schweighofer imported large amounts of Ukrainian logs into Romania for many years, during a time when Japanese companies purchased around half of Schweighofer’s Romanian exports. EIA was not able to obtain customs data for the other large European companies implicated, so we cannot say whether these companies also sold illegally harvested Ukrainian timber to Japan.

Field investigations indicated that 40 percent of the timber being produced by Ukraine’s state-owned enterprises (which manage three-quarters of the country’s forests) is illegally cut through the abuse of so-called sanitary harvesting operations, meant to stop the spread of disease. 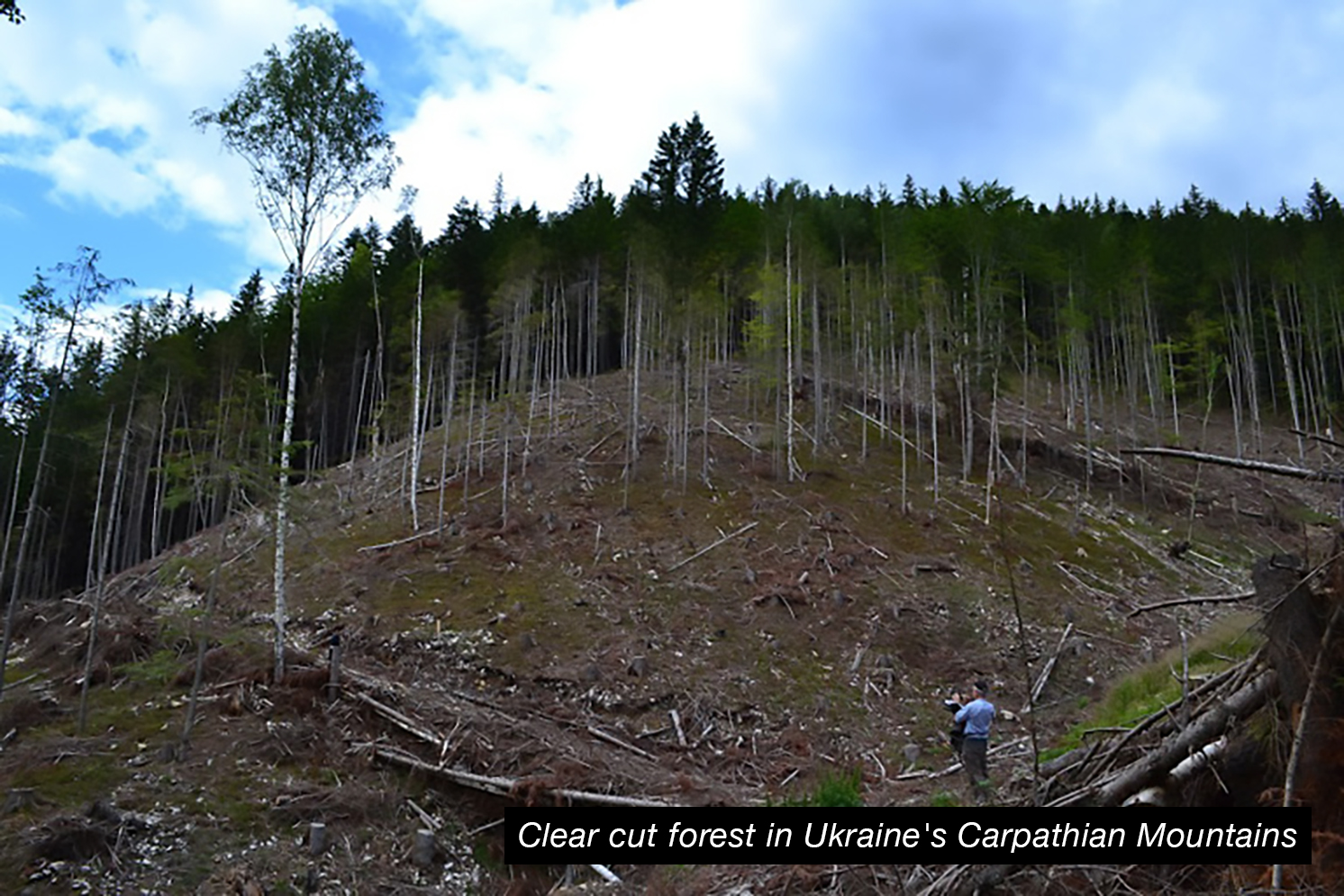 Court records uncovered by Earthsight showed that top forestry officials in Ukraine’s largest timber-producing provinces are the subject of major criminal investigations, involving systematic illegal logging and timber exports. A former national forest chief, Viktor Sivets, is on the run, accused of having received over €30 million in bribes from overseas log buyers in exchange for access to cheap timber. Schweighofer also has the unique distinction of being the only large European company to be specifically implicated in this bribery scandal.

Earthsight found that Europe’s largest wood processing companies are the primary buyers for this illegal wood. Prior to the full implementation of Ukraine’s log export ban in 2017, Schweighofer was by far the largest importer of Ukrainian wood. This wood fed Schweighofer’s Romanian sawmill on the border with Ukraine, and Schweighofer sold much of this Ukrainian wood onward to Japan. Schweighofer’s mill prided itself on having installed a glulam production line specifically designed to meet the demands of the Japanese housing market. 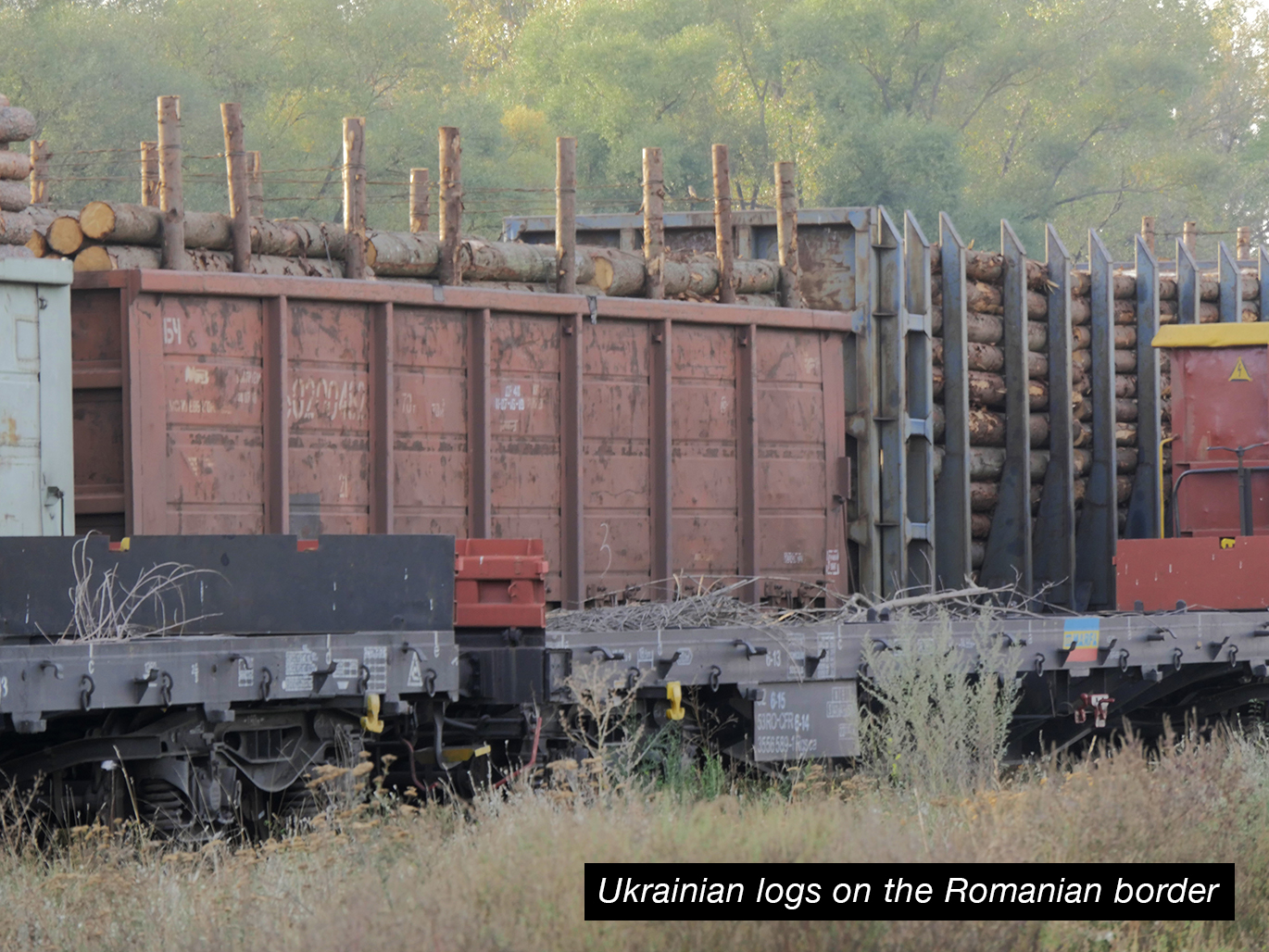 All of the large European buyers continue to import large volumes of wood from state logging enterprises which are the subject of such investigations. Many of these companies continue to import significant volumes of logs despite the log export ban – abusing a loophole allowing exports of low-quality “firewood” logs.

Ukraine is home to some of the largest tracts of forest left on the continent, home to rare animals such as bears, wolves, lynx and bison. As well as threatening these forests, Earthsight’s report shows, the EU’s imports are undermining the efforts of Ukraine to establish the rule of law.

Ukraine continues to battle some of the highest levels of corruption in the world. Earthsight’s report reveals how laws are being broken all along the timber supply chain in Ukraine from harvest to export. Critically, Earthsight’s investigation found that illegalities were just as common in forests certified by the Forest Stewardship Council (FSC) as in non-certified forests – questioning the effectiveness of certification in curbing illegal logging in an environment of elevated corruption and weak rule of law.

Over the past two years since EIA first reported its findings of extensive illegal timber sourcing by Schweighofer, Japanese imports from Schweighofer’s Romanian mills have stayed level. These purchases, totaling more than ¥17 billion in 2017, comprise more than half of Schweighofer’s global exports. Between 2015 and 2017, none of Schweighofer’s main Japanese buyers have dropped imports from the company, according to Romanian customs data. Only one among them, Sojitz, appears to have cut back on imports, by half (See Table 2). 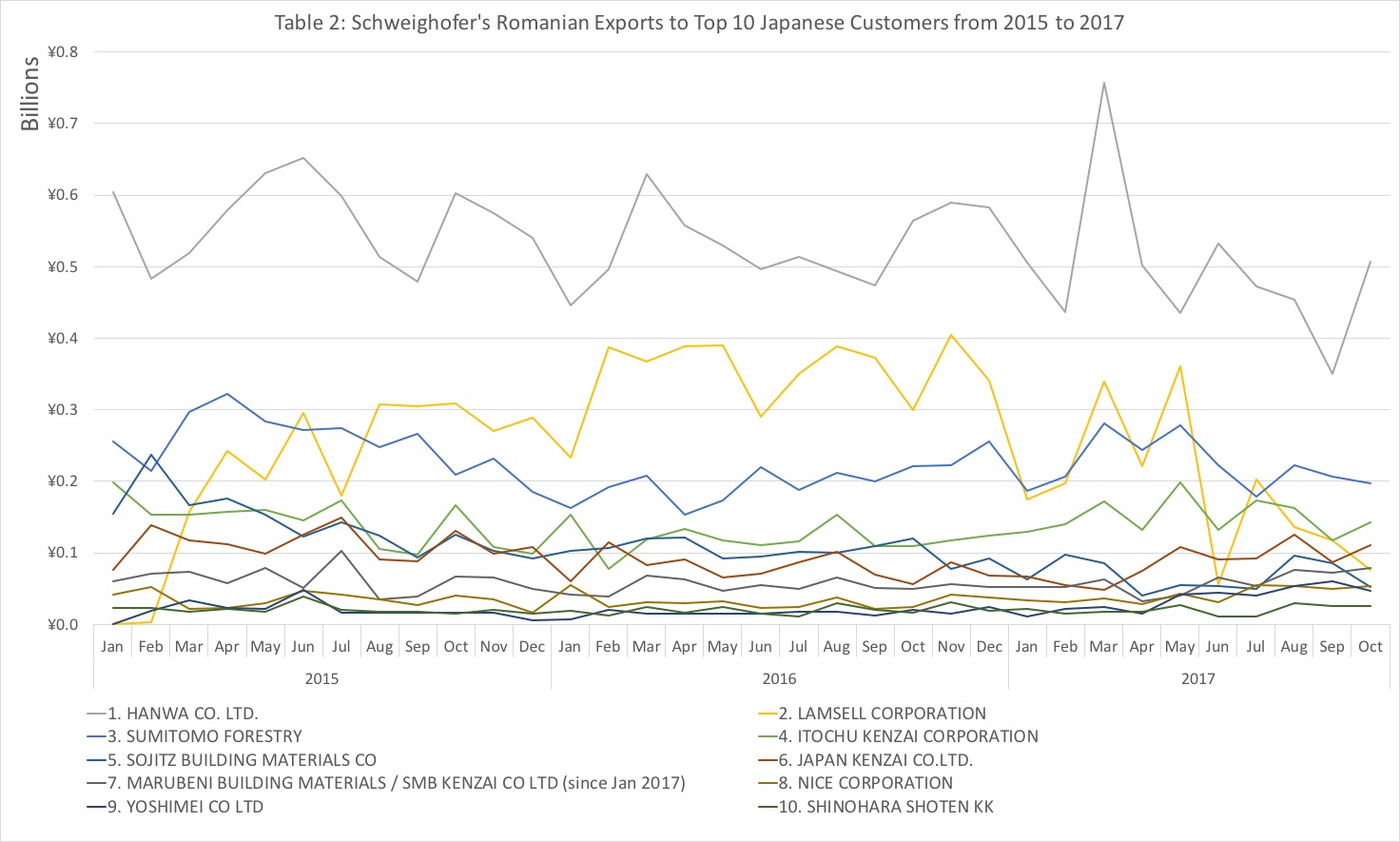 During the same period, most of Schweighofer’s high-profile European buyers have stopped purchases of Schweighofer wood from Romania, including Austria’s SPAR, UK-owned Brico Dépôt, Germany’s Hornbach, and France’s Leroy Merlin. The inaction by Japanese importers calls into question the commitment of Japan’s largest trading companies to establish and comply with internal Due Diligence policies, and of the Japanese government to enforce Japan’s new Clean Wood Act (CWA). 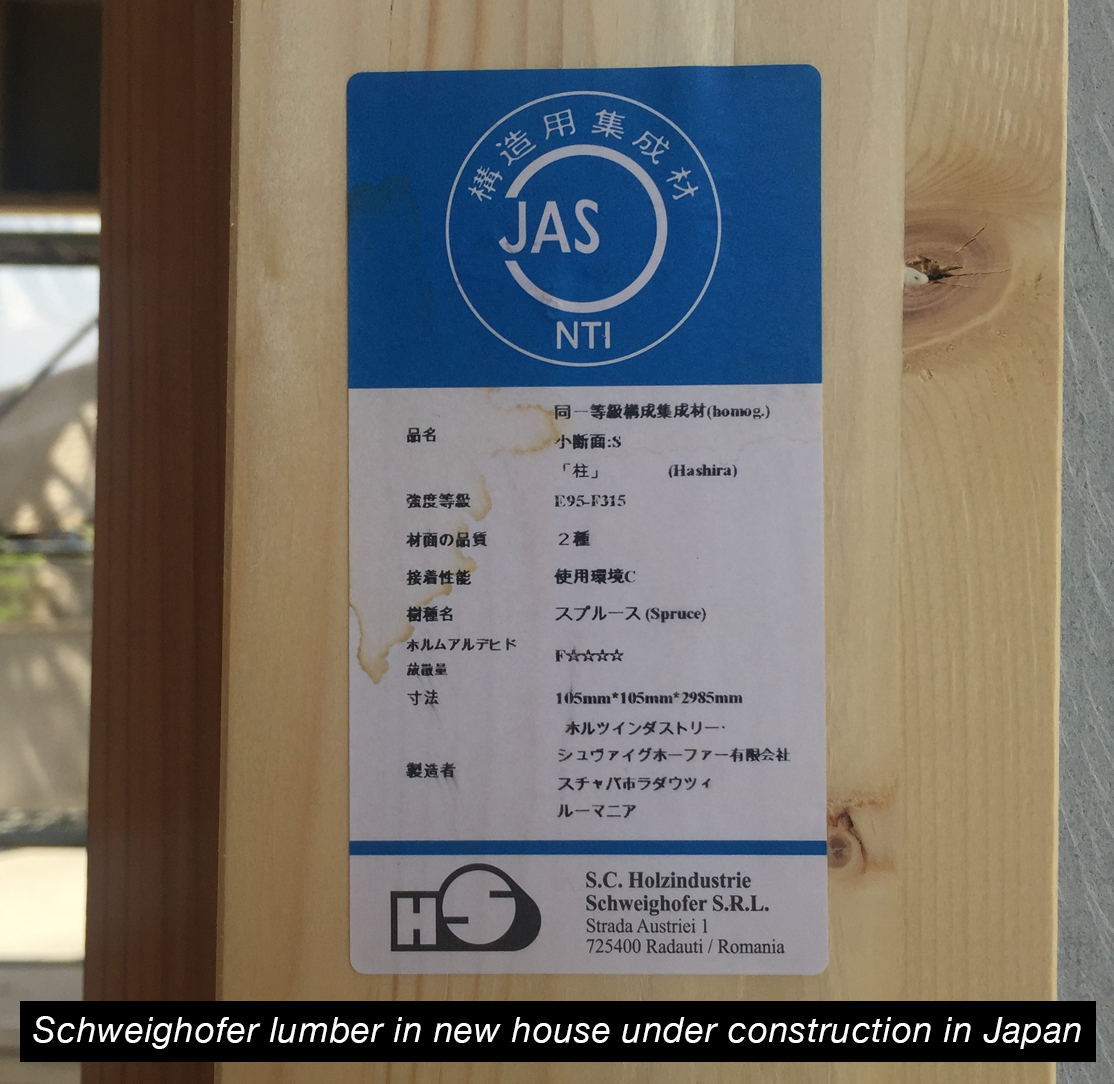 Itochu Kenzai and Sojitz Kenzai are two other large buyers from Schweighofer. Both companies have also drafted due diligence policies in recent years, and have made some significant progress toward moving away from high-risk timber supplies, in particular regarding regions such as Russia and Sarawak. Unfortunately, according to Romanian customs data, only Sojitz seems to be purchasing less lumber directly from Schweighofer in 2017.

Under Japan’s CWA, importers and wood traders can voluntarily register to conduct due diligence to ensure the use of legal timber. As of July 2018, 57 companies had registered as “Type 1” CWA participants, meaning they are first-placers of timber on the Japanese market – either as importers or through domestic production.

Japan imports spruce and red pine from Schweighofer, either in raw lumber form or as “glulam” edge-glued beams and posts. These imports are used largely in Japan’s wooden house-building industry, where they are largely interchangeable with Japanese domestic cypress. Cheap imports of illegal timber from Eastern Europe thereby directly undercut Japanese producers, making it difficult for Japanese forest owners to receive a fair price on the Japanese market.

Japan’s CWA lacks penalties for the import of illegal timber or for the implementation of a faulty due diligence policy. Instead, the most serious penalty that can be levied on a company is to be removed from the list of registered companies. The new evidence presented here indicates that such action may be necessary for companies that continue to import high risk Schweighofer timber coming from Romania and Ukraine.

Over the past decade, Japanese buyers have been the largest supporters of Schweighofer’s activities in Romania and Ukraine. Their ongoing imports continue to fuel illegal logging in the region, and to prevent necessary reforms from taking hold.

Hanwa, Sumitomo Forestry, Itochu, and other large importers need to immediately halt all purchases from Schweighofer. Schweighofer’s failure to implement real traceability for its Romanian and Ukrainian log purchases means that the company remains exposed to large amounts of timber from unknown sources that is likely to be driving illegal and unsustainable logging in some of Europe’s most biodiverse forests. As long as Schweighofer’s Japanese market remains open, it is unlikely that the company will feel any pressure to enact real changes to finally exclude illegal timber.

The failure of FSC and PEFC to ensure legal logging in Ukraine and Romania provides further evidence that certification alone cannot replace robust company due diligence for legal timber sourcing. Until FSC and other certification systems provide real traceability and transparency, they will remain largely ineffective tools for supporting compliance in regions of high risk for illegal logging and corruption.
By continuing to import wood from Schweighofer, Japan’s largest trading companies have made Japan’s consumers the unwitting supporters of illegal logging, bribery, and corruption in Eastern Europe – with devastating consequences for Europe’s last ancient forests. The Japanese people, and the forest-dependent communities of Eastern Europe, deserve better.

For more information on how Schweighofer is still getting wood from Romania’s National Parks, please see:

Behind The Scenes: How Log Yards Hide the Destruction of Europe’s Ancient Forests 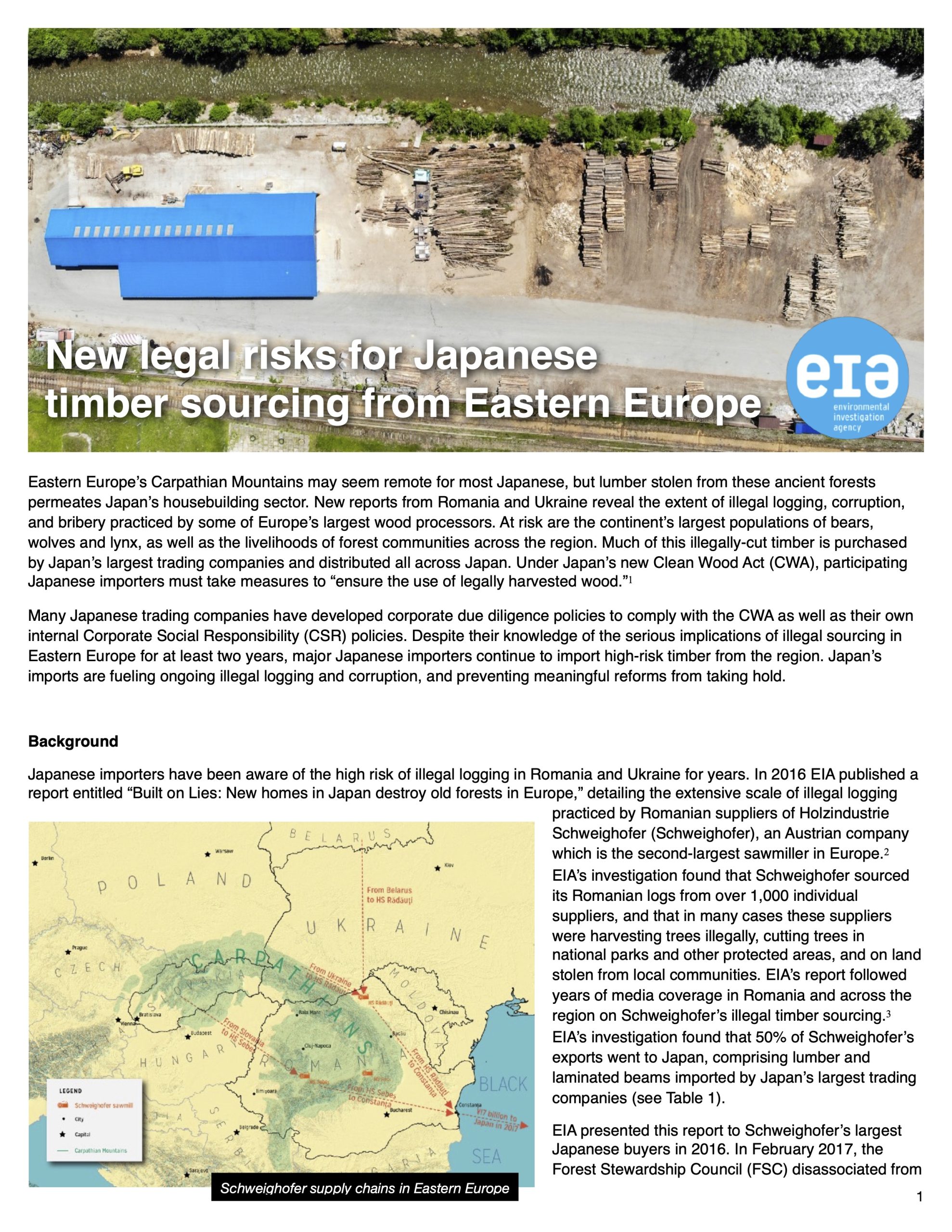